Cougars Koff(er) it up late against Regina 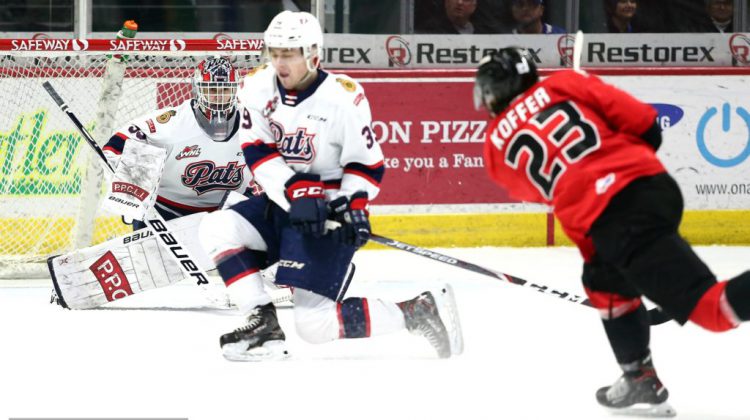 (Photo supplied by Keith Hershmiller and the Regina Pats)

Just when you think the Prince George Cougars have turned the corner, they revert back to their old habits at the worst possible time.

Despite holding a 3-1 lead after the first period, the Cougars found a way to squander a 5-4 shootout decision to the Regina Pats on Wednesday to kick off a six-game East Division road swing.

The Pats take this one in the 5th round of the shootout. @PARaidersHockey up next, Friday. pic.twitter.com/82cxFcmPZK

Filip Koffer busted out of the gate like gangbusters for Prince George lighting the lamp on two occasions against Pats goalie Max Paddock for an early 2-0 advantage.

In the final five minutes of the opening frame, both teams traded markers as ex-Kamloops Blazer Carson Denomie put Regina on the scoreboard at 14:15.

Cougars forward Brendan Boyle squashed the Pats momentum ending the period with a goal set up by Regina product and rookie Davin Griffin who recorded his first point in the WHL.

After an uneventful start to the second period, Regina exploded offensively with two goals 1:10 apart courtesy of Denomie and Logan Nijhoff tying the score at 3-3.

However, Connor Bowie turned the tide for PG at 17:30 capitalizing on a scoring play that involved both Koffer and Mitch Kohner.

Connor Bowie finds the rebound and takes the lead for @PGCougars

Late in the third, Nijhoff stung the Cats again with less than four minutes remaining in regulation potting his eighth of the season from Robbie Holmes and Zach Wytnick, sending the game into overtime.

The three-on-three session resolved nothing, leading to a five-round shootout.

Cole Dubinsky and Zach Smith found the back of the cage while the Cougars scored on their very first attempt courtesy of Ilijah Colina.

Paddock on the other hand, stopped 31 shots for Regina and was named the second star.

Kohner and Jack Sander recorded two assist games in a losing effort for the 10-22-2-4 Cats who are seven points out of the final wild card spot in the Western Conference, which is occupied by the Seattle Thunderbirds (15-20-2-1).

Next action for the Cougars is on Friday when they travel to Prince Albert to play the Raiders (21-14-5-1).

Catch the action at 5:00 PM Pacific time on 94.3 the Goat with Fraser Rodgers doing the play-by-play.