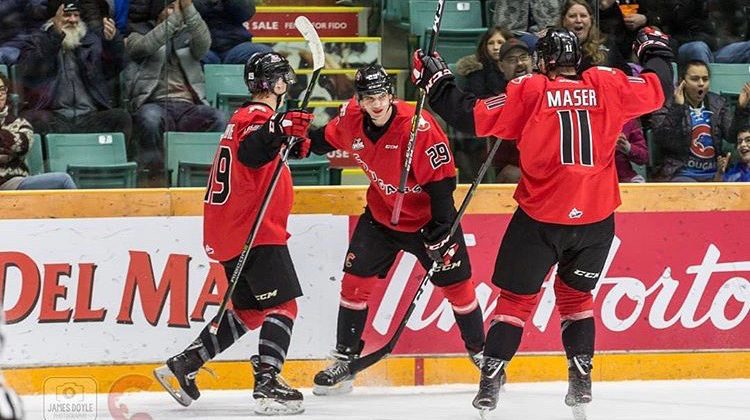 The Prince George Cougars followed a 5-4 shootout loss (Wednesday in Regina) with a 2-1 overtime loss (Friday in Prince Albert) followed by a much needed 4-1 victory against the Blades Saturday in Saskatoon.

The Cougars now have four points (1-0-1-1) to show for their six-game Eastern Division road trip with three games remaining.

Like he’s been most of the season, Taylor Gauthier was the best Cougar.

Josh Maser opened the scoring on a power play early in the second period and added an empty-net goal in the final minute of the third.

Maser’s two goals were his first in six games.

Saturday was a good night in Saskatoon.

Jonny Hooker scored his second goal in as many games in a P.G. uniform, and it turned out to be the winner at 7:19 of third.

Connor Bowie also tallied for the Cats while Vladislav Mikhalchuk chipped in with three assists before 3,831 fans.

The Cougars will play Tuesday in Winnipeg, Wednesday in Brandon and will conclude the road trip Friday in Moose Jaw.

LISTEN: @Hartley_Miller chats with @cFallooner on this week’s edition of the Cat Scan Podcast. Falloon played 336 career games with the @PGCougars before suiting up for the @umbisons | #cityofpg https://t.co/ffWqlo8GOM #sports #NorthernUprising pic.twitter.com/xNp17TXPaS