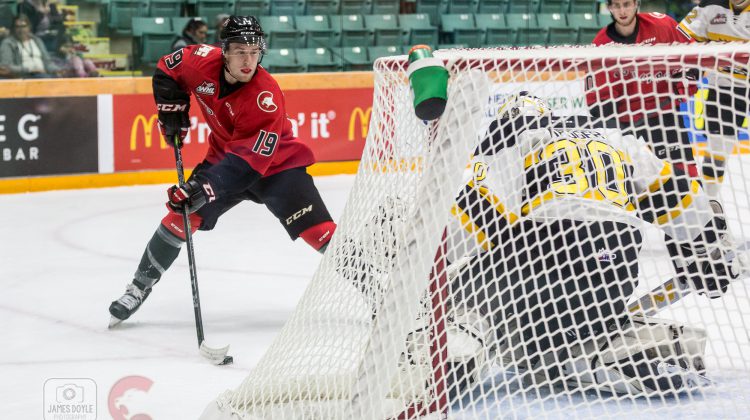 A trip to the Wheat City didn’t yield any results for the Prince George Cougars.

Chad Nychuk and Duncan Pierce notched a goal and assist each for the Brandon Wheat Kings on Wednesday skating to a 4-0 win over the Cats in front of 2,506 fans at Westoba Place.

Nychuk scored on the power-play at 8:12 of the first period following a pass from Vincent Iorio to give the Wheat Kings a 1-0 lead after 20 minutes.

Prince George remained within an eyelash heading into the third period until the roof caved in as Brandon scored three times in eight minutes peppering Cougars netminder Taylor Gauthier.

Pierce, Connor Gutenberg and Marcus Secundiak all lit the lamp for the Wheat Kings who outshot PG 41-21 overall.

Jiri Patera pitched a shutout for the 22-17-1-2 Wheat Kings who extended their winning streak to seven.

Ex-Wheat Kings Jonny Hooker failed to get on the scoresheet in his first game against his old team since being acquired by the Cougars at the WHL Trade Deadline.

Ditto for former Cougar Reid Perepeluk who went the other way in that trade.

Prince George defenceman Cole Moberg left the game and did not return after blocking a shot.

Great to see alum Jonathan Filewich here with his students from Souris! pic.twitter.com/GHCSLB3Lod

Moose Jaw is 19 points out of a playoff berth.

Prince George is eight points behind the (17-20-2-1) Seattle Thunderbirds for the final Western Conference wild-card spot.

It was nice of Reid @perepeluk to show some old pals around @WestobaCU Place tonight pic.twitter.com/FosgvC4ss6