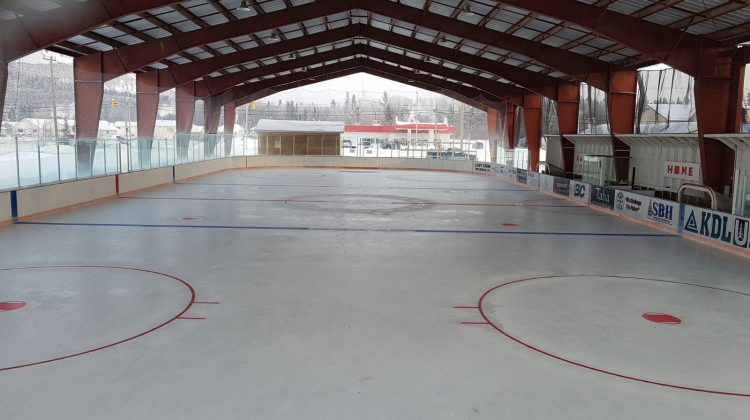 A picture of the Ernie Sam Memorial Arena, the site of the Winter Classic. (Photo supplied by the Cariboo Cougars)

The Cariboo Cougars and Northern Capitals are taking it outside this weekend.

Both male and female Midget AAA hockey programs will be participating in the Winter Classic from the Ernie Sam Memorial Arena on Nak’azdli Whut’en territory in Fort Saint James.

Cariboo General Manager, Trevor Sprague told MyPGNow.com this event is a chance for more youth to get involved in hockey.

“It brings in all the youth, it brings in all the players and all the kids wanting to play the game of hockey and maybe one day say hey I want to be a Northern Capital or a Cariboo Cougar and those young ladies and young men need to sign up and play hockey, that’s what we’re trying to do.”

Sprague adds the weekend will be a unique first experience for the Capitals.

“For the Northern Capitals, this is the first time in female midget hockey to have an outdoor game, it’s going to be pretty unique for them, which is very exciting and on the boys side it’s just coming up and they are doing a lot of community engagement by giving back as well.”

Sprague adds it’s been a much smoother process this time around.

“The things we have taken from last year, we have dressing rooms set up for both teams and then we’ve got a Zamboni room that’s just getting finished up here with hot water are some of the things that we have right now.”

“This year we started out with actual ice on the concrete slab, it’s been a little less rough than it was last year with having two rinks with no ice in them. The Fort Forum and Ernie Sam Arena both have ice in them so we’re in a pretty good spot.”

The Cougars will take on the Vancouver Northwest Hawks on Saturday while the Capitals battle the Greater Vancouver Comets Sunday morning.

The Cougars are currently in fifth place in the 11-team BCHMML.

The Capitals (10-7-2-0) head into the Winter Classic weekend in third place. The first-place Comets have been nearly flawless at 16-1-0-0.

Both teams will also be playing in the Fort Forum, the Caps will play the first game of the triple-header Friday night in Vanderhoof.