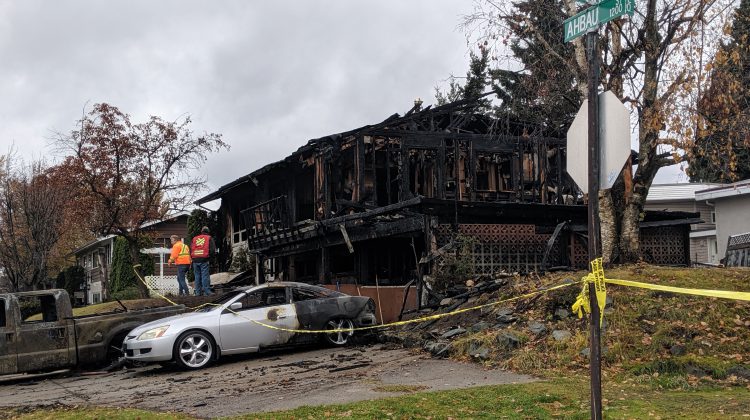 File photo of aftermath of a house fire on Chilako Ave. (MyPGNow.com staff)

The residence was the site of a structure fire last October, causing approximately $400,000 worth of damage and leaving one man dead and three in hospital.

Manager of Bylaw Services, Fred Crittenden explained since the fire, the property has been neglected and become a danger.

“It becomes an attractant to people who don’t have good intentions, it also becomes a nuisance to the neighbors and detracts from their property values.”

He noted debris from the structure has also washed into the gutter, causing maintenance concerns.

Crittenden said the owners of the property have been contacted repeatedly to deal with the damaged structure, but have not responded.

“We don’t typically have to do that with this type of structure. A lot of people would have insurance that would normally cut it, but this is a safety issue,” said Crittenden.

“It was learned through the investigation that there doesn’t seem to be any insurance on the structure itself or at least none that would cover what happened.”

Following a presentation, Council voted unanimously to declare the property unsafe and a ‘nuisance’, requiring remedial action to demolish the structure and remove debris.

Councillor Garth Frizzell said the city has now sent a clear message to the owners.

“When it is a hazard to the people of Prince George we clean it up. If they can’t respond, we will go in and we will get it done.”

A demolition deadline of February 28th at 5 pm was given otherwise, the city will be asked to intervene at the expense of the property owners.