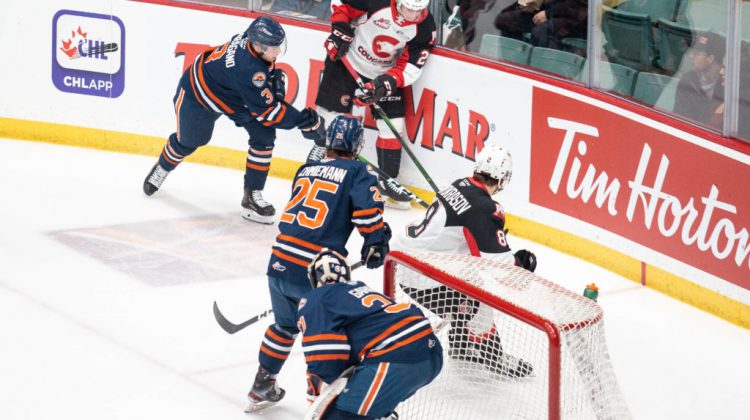 (File photo of the Prince George Cougars against the Kamloops Blazers in the 2019-20 season courtesy of the PG Cougars and Brett Cullen Photography).

A five minute stretch in the opening period was key to the Kamloops Blazers 3-0 victory over the Prince George Cougars Friday night before 1,993 fans at CN Centre.

Down 1-0, the Cougars had a five-minute power-play at 11:28 of the first period, including a
five-on-three man-advantage for the last two minutes.

They mustered just one shot on goal over the five minutes and zero shots for the entire 5-on-3.

Kamloops forward Connor Zary collided with Taylor Gauthier, which resulted in a five-minute major penalty for goaltender interference as well as a game misconduct.

Exactly three minutes into the major penalty the Blazers were called on another goaltender interference penalty (to their leading scorer Zane Franklin), which handed Prince George a full two-minute two-man advantage.

The Cougars were blanked for the 7th time this season and for the second time in their last three games.

Gauthier has a .950 save percentage in four meetings against the Blazers this season.

Josh Pillar scored twice, including the winner at 9:09 of the first period.

The last Kamloops goal by Caeden Bankier was scored into an empty net.

The Blazers have outscored the opposition 52-9 during their nine-game win streak.

The (12-25-3-4) Cougars are nine points behind the (18-22-3-1) Seattle Thunderbirds for the final Western Conference wild-card spot with both teams having 24 games left, including four against each other.

The Cougars host the Blazers again tonight as they continue a six-game homestand.