BC Liberal leader proclaims: “we’ve got trouble in our natural resources sector” 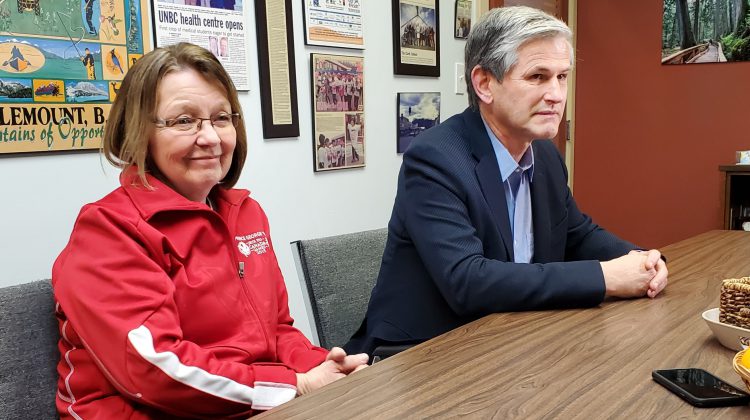 BC Liberal Leader Andrew Wilkinson addressed a variety of issues with members of the media during a roundtable discussion today (Tuesday) in Prince George.

Wilkinson, who was joined by Prince George-Valemount MLA Shirley Bond, opened the meeting with a lively discussion on natural resources as he emphasized the importance of industry for the economy of Northern BC.

“If you start at Cache Creek and go north, so many of our communities look to forestry as their primary employer.”

He also acknowledged the nagging issues that have led to curtailments and closures across the forestry industry, saying: “people are feeling a lot less confident in where their immediate future is. That needs to get addressed,” adding “we’ve got trouble in our natural resources sector.”

Wilkinson explained his belief that one of the primary issues within the forestry sector is stumpage, adding that he is particularly fond of adopting a month-to-month model similar to the one seen in Alberta.

While discussing the disagreement between Coastal GasLink and the Wet’suwet’en, Wilkinson explicitly stated that he believes in reliance on the legal system and court decision, before commenting that Premier John Horgan arrived at the same conclusion.

“We do hope that there’s the quiet diplomacy going on right now, where the faction of the Wet’suwet’en who are engaged in this blockade will come to their senses and realize that this country is governed by the rule of law… hopefully we can get on with the inevitable, which is construction of the Coastal GasLink pipeline.”

The Liberal leader also celebrated the importance of northern communities as a “resource hub”, explaining that despite only possessing “6% of the provincial population, the interior and north make up “two-thirds of the area of the province.”