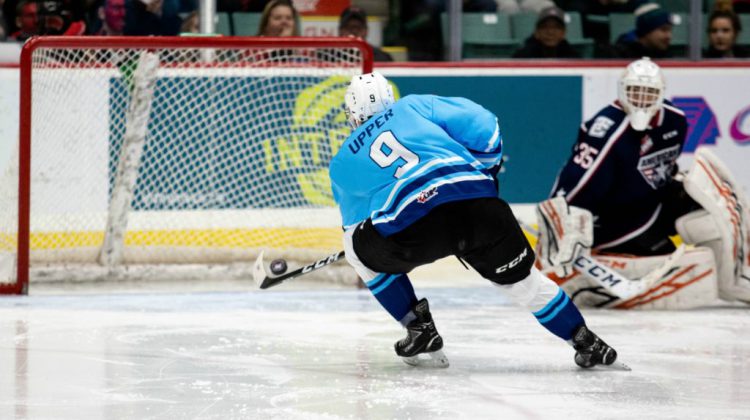 A sleepy start turned into a big finish for the Prince George Cougars.

Sitting 10 points back of a postseason berth, the Cougars scored five unanswered goals in a 5-1 win over the Tri-City Americans in front of 2,126 fans at CN Centre.

“It’s a fine line to win in this league, you can’t take anyone lightly. I don’t think we got off to a great start but as the game went on we got better and better and that’s what we needed,” said Majid Kaddoura, Cougars defenceman

After outshooting the Americans 14-5 in the first period, Prince George found themselves down by a goal for most of the second period as ex-Kamloops Blazer Luke Zazula rifled home a wrist shot past Taylor Gauthier.

Josh Maser tipped home a Cole Moberg point shot on the power-play putting the home side on even terms at the end of 40 minutes.

The roof finally caved in on Tri-City as the Cougars began the final period with some quick-strike offence, lighting the lamp twice in a span of 40 seconds courtesy of Ilijah Colina and Tysen Upper.

“By the third period we were driving hard to the net, chipping pucks past their defence and that’s exactly what we had to do to win,” added Kaddoura.

Prince George continued its dominance as Moberg let a hard slap-shot go from the point on the man advantage beating a hand-cuffed Geraghty.

Vladislav Mikhalchuk capped off a three-point night for the Cats scoring on a breakaway after a Tri-City turnover.

Moberg spoke with MyPGNow.com after the game who said the team had to play a little grittier against a much younger team.

“We’re a bigger team so we had to get pucks and bodies to the net and with a 15-year-old goalie in the net he’s played solid for them and he played well again tonight, it’s just much harder for him to see the puck when we have a guy like Maser standing in front. We just had to pick the corners.”

Tri-City has lost eight straight and during that stretch has been outscored 54-12.

The Cougars clicked twice on the power-play on four opportunities while Tri-City failed to score on its three attempts.

With the win, PG is eight points behind the Seattle Thunderbirds for the final wild-card spot in the Western Conference.

The T-Birds play a double-header in Prince George Tuesday and Wednesday.

Tri-City’s other two 15-year-old players were Ben Feenan who played his first WHL game on Friday while Rhett Melnyk suited up for the second time at the major junior level.

Gauthier made 21 saves for the win.