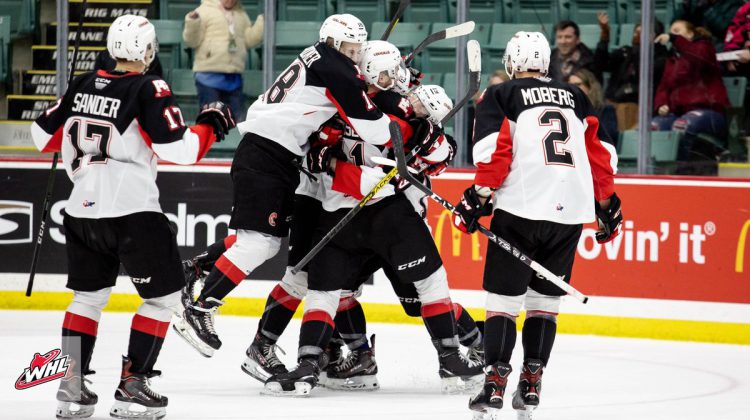 In what was the Cougars biggest game to date, the 18-year-old forward recorded a three-point game including the game-winning goal at 16:56 of the third period to ice a 6-4 victory Tuesday night over the Seattle Thunderbirds.

Browne finished off a scoring play from Jack Sander and Cole Moberg on a delayed T-Birds penalty pushing the puck past goalie Roddy Ross who allowed five goals on 39 PG shots.

“Our power-play was great tonight, I thought we executed it all and I was just feeling myself out there so I guess I could say that,” added Browne

Prince George blitzed Seattle out of the gate jumping out to a 3-0 lead.

Vladislav Mikhalchuk, Tyson Upper and Moberg kicked started the offensive fireworks for the Cougars in front of a sparse crowd of 1,809 fans at CN Centre.

“I don’t think we came out the way we wanted to, we got down early, which led to us clawing back the rest of the game and we just have to focus on our start tomorrow and I think we’ll get a better result tomorrow (Wednesday),” said Payton Mount, Thunderbirds forward.

A parade to the penalty box gave Seattle more momentum as Keltie Jeri-Leon and Connor Bruggen-Cate lit the lamp less than three minutes apart on the power-play to even the game at 3-3 after 40 minutes.

Ryan Gottfried gave the Thunderbirds lead at 5:18 of the third period, sneaking in on a back-door play that was started by Mount and Matthew Rempe.

“We got off our game a bit, by not putting pucks to the net and then we were trying to cheat for offence, thus taking penalties looking for pucks. Against a team like that, we can’t take penalties in a must-win game, you have to stay disciplined,” said Upper.

Josh Maser swung the momentum back on the Cougars side tying the game at four, tapping home a loose puck on the power-play past a sprawled out Ross.

After Browne put the Cats up for good, Connor Bowie ensured the victory with an empty-netter as Prince George got outshot 40-39 in the contest.

“We want to play in the playoffs here so we know that we play these guys two more times this week (Wednesday in PG, Sunday in Seattle) and we have three more overall so if we can cut that deficit down to even a few points, that will be huge for us,” added Upper.

Prince George went 2-for-4 on the power-play while Seattle was 2-for-6.

Both teams play the rematch tonight at 7:00 PM from CN Centre.