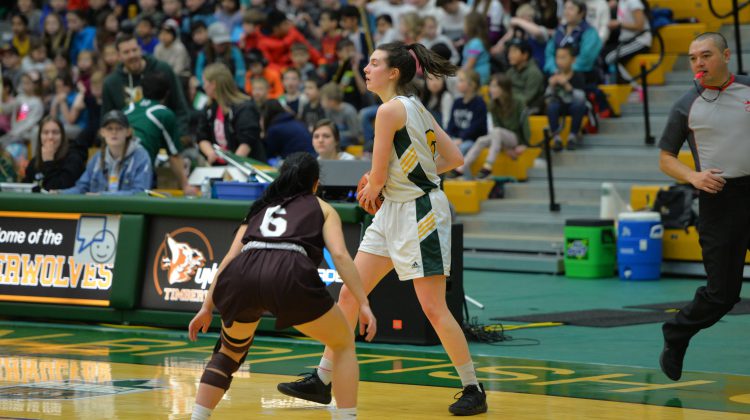 On a day that over 1,500 elementary school kids from Prince George filed into the Northern Sport Centre, the Timberwolves put on a show defeating the MacEwan Griffins 84-63 on Friday.

After a relatively close first quarter where UNBC had a 17-12 advantage, the T-Wolves pulled away from the struggling Griffins in the second quarter outscoring the visitors by a 26-12 margin.

The victory was the Timberwolves seventh straight as they improve to 10-9 on the season.

The fourth-year product out of Duchess Park soaked in the entire experience.

“It was amazing, even lining up for the anthem, and everyone was singing,”

“The whole crowd went crazy, so it was so awesome having them there. It was really cute, and we really appreciated it,” added Landry.

POSTGAME: 20 points, 3 rebounds, 2 assists for @landry_madi in @UNBCWomensBball 84-63 win over @MacEwanGriffins! That’s seven wins in a row, with just six players! Hear from Landry, who sits top 3 in @CanadaWest in scoring! #gotwolves pic.twitter.com/4sjZLs0WfI

Landry also marvelled at another solid outing from vanBruinessen who continues to be a monster at both ends of the court.

“She has been so key at both ends of the floor.”

“Without her, it would be next to impossible. The last few games she has found a way to score, and she has been huge for our team.”

The lone bright spot for MacEwan was Mackenzie Farmer who put up 16 points and 7 rebounds in a losing effort for the 2-17 Griffins.

“It was a little bit frustrating, but I thought they outworked us in the first half,”

“We responded well, at times, but we were on our back foot. They took advantage,” said Farmer.

POSTGAME: @MacEwanGriffins‘ Mackenzie Farmer had 16 points & 7 rebounds but GMU falls 84-63 to @UNBCWomensBball. Hear from the talented third-year guard below! pic.twitter.com/PrMsqRkJHa

UNBC is tied for 8th spot in the conference with the Lethbridge Pronghorns who defeated the Thompson Rivers Wolfpack on Friday night.

On the men’s side, it was a glass half-full, glass half-empty scenario.

While the Timberwolves coasted to an 89-72 win over the Griffins, UNBC was eliminated from playoff contention as the Brandon Bobcats upset the Manitoba Bisons to clinch the 12th and final spot.

Tyrell Laing was once again the top-scorer for the T-Wolves (5-14) with 21 points, including a 5-for-7 showing from three-point range.

“It wasn’t a different game, in terms of preparation for us,”

“We have wanted every game this year. We understood what was at stake, so we wanted to come out and compete.”

Fareed Shittu, Anthony Hokanson and Saymon Loki also chipped in with 12 points each.

Both varsity teams wrap up the regular season against MacEwan at 5:00 and 7:00pm from the NSC.