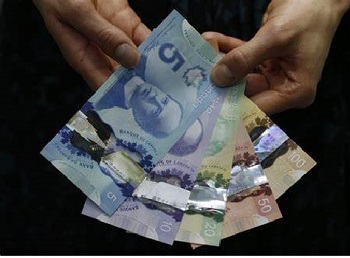 The RCMP state there have been no recent cases of counterfeit currency in Prince George.

The issue is being brought up once again after numerous complaints in Fort St. John where fake bills are being passed around.

Cpl. Craig Douglass told MyPGNow.com these types of calls come and go throughout the year.

“We go through spikes and valleys on that subject, we generally have maybe a few times a year where we have an influx of counterfeit currency in the community and they tend to be distributed by the same people until such time until they are caught.”

Douglass also went over what residents should look for if they get into a similar situation.

“The Canadian polynomes that we have are much harder for sure, the holograms should not have any cuts in them, tape on the money or anything that seems out of place as a consumer, we probably shouldn’t accept it, if it doesn’t feel right than it probably isn’t.”

A suspect was charged for uttering counterfeit currency in Fort St. John in relation to some of the complaints.

A link to the Fort St. John RCMP release can be found here.

The Bank of Canada has several graphics and tips for people on how to better spot counterfeit currency.