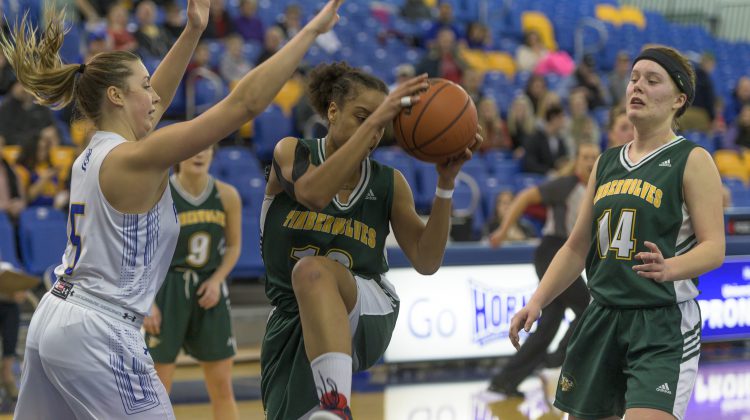 For the second consecutive year, the UNBC Timberwolves won a playoff game coming from behind.

Down 43-30 at halftime, the Timberwolves dug deep to nip the Lethbridge Pronghorns in double overtime on Friday 93-85 at 1st Savings Centre.

Both teams were neck and neck at the end of the first quarter with the Pronghorns on top 21-18.

Lethbridge continued to pour on the pressure as the trio of Kacie Bosch, Amy Mazutinec and Asnate Fomina dialed it up from beyond the arch giving the hosts a double-digit lead at recess.

The Timberwolves came out the much hungrier team in the second half courtesy of Duchess Park grad Madison Landry who had a game-high 30 points, including a 14-for-15 outing from the free throw line.

Tough finish here by Madi Landry off a great feed from EVB, as @UNBCWomensBball battles with Lethbridge in the @CanadaWest playoffs. pic.twitter.com/OuQuBGhwQi

Maria Mongomo continued her stellar play at crunch time with another double-double posting 22 points and 11 rebounds.

Q1: Maria Mongomo gets the steal and layup as @UNBCWomensBball find themselves down 21-18 after ten minutes. Mongomo with 9 for @UNBC, Bosch with 7 for Horns. Watch live on @CanadaWest TV! pic.twitter.com/qIQa8kLzF1

Late in the fourth quarter, Emma vanBruinessen received an easy layup to put UNBC in front but that was short-lived as Bosch made a shot of her own to even the score.

In the first overtime session, both teams traded baskets scoring eight points each in the extra frame, forcing them to play on.

UNBC finally pulled away from Lethbridge thanks to some timely three-point shooting from Emily Holmes who struck it rich twice from beyond-the-arch and also made a pair of free-throws.

vanBruinessen was a matchup nightmare all game long against Lethbridge where she added 14 points and 15 rebounds.

The Timberwolves made 41% of their field goals, compared to the Pronghorns who drained just 36.6% of them.

UNBC only dressed seven players for the game.

The Timberwolves move on to the quarter-finals on Thursday against the Calgary Dinos (18-2).

U of C is the third-ranked team in Canada.