Hitmen pull the trigger against Cougars 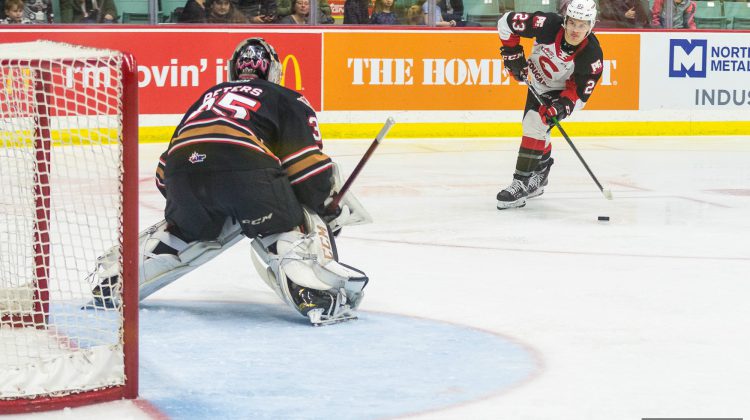 A memorable 19th birthday for Taylor Gauthier quickly turned into a nightmare thanks to the Calgary Hitmen.

The Prince George Cougars fell behind early and often against the Hitmen on Saturday, dropping a 4-2 decision in front of 4,012 fans at CN Centre.

Carson Focht showed excellent marksmanship for Calgary 1:21 into the game beating Gauthier for a 1-0 lead.

“We’ve stressed all year on having good starts, Mark’s line (Kastelic) had a good shift to start and I think our line carried that one by having a decent shift and we buried one so it was a good start for us,” said Focht.

Calgary kept up the pressure against Gauthier in the middle frame as Riley Fiddler-Schultz and Adam Kydd scored 42 seconds apart extending the Hitmen lead to 4-0.

“Anytime you are playing a game as important as this one you need to be ready to play right from the start. We weren’t physically or mentally involved to start the game the right way and when you get behind a team like that you’re going to be struggling to get back in it. The first 30 minutes our compete level wasn’t where it needed to be,” said Jason Smith, Cougars Associate Coach.

Smith was dumbfounded the Cougars didn’t come out with more urgency.

“Sometimes it’s hard for our group to realize how important and how close it is to having success or not having success, when you are a team that’s fighting to get back in the mix the attention needs to be there and we didn’t have it tonight. We need points and we need wins, we can’t be second in results and effort like we were tonight.”

Filip Koffer finally breathed some life into the building for PG beating Hitmen goalie Brayden Peters to cut the deficit to three after 40 minutes.

In the third, Prince George made the game more respectable following an undisciplined sequence from Calgary blueliner Jett Woo who was awarded six minutes in penalties, which included a high-sticking infraction along with a double-minor for spearing.

Josh Maser scored his 22nd of the season on that lengthy power-play making it 4-2.

However, the Cougars (16-29-3-4) were unable to draw any closer and as a result, dropped their third consecutive game, remaining nine points back of the Seattle Thunderbirds for the final wild card spot in the Western Conference.

Was the loss a sign of a team that still doesn’t know how to win after going through back-to-back losing seasons?

Smith believes that’s only part of the equation.

“The team hasn’t had a lot of success the last two years and a fair number on this team were a part of that and I think they need to be the guys that lead the charge out of this situation you can’t be content with not having success. I think everybody in our room wants to win but the leadership group has to lead by example on the ice and I don’t think our guys did that.”

Calgary improves to 30-18-4-1, good enough for fourth place in the ultra-tough Central Division.

Focht states their current position isn’t a true indication of what the Hitmen are all about.

“Where we are in the standings in our division isn’t an accurate representation of what our team is like. I think we have been doing well all year, we have stumbled but that is inevitable throughout the season and we just want to get better everyday.”

Tyler Brennan stopped all 15 shots he faced in relief of Gauthier.

PG is back on home ice Family Day Monday against the Red Deer Rebels.