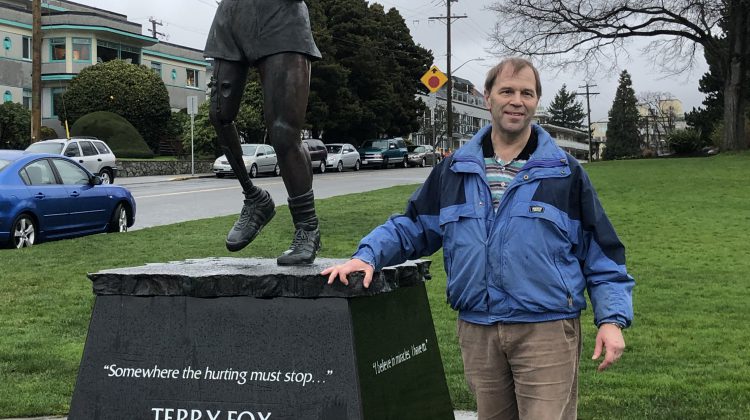 Jim Terrion, originally from Prince Rupert, moved to Prince George in 2006, bringing his fundraising efforts with him.

Terrion was born deaf and was inspired by Terry Fox’s historic run; and set a goal to walk across Canada and back to raise awareness for deaf or hard of hearing individuals.

The 59-year-old walked 9917 km on his first walk but started canvassing for the walk itself in 1991.

He splits his time between Prince Rupert and Prince George, returning to his hometown for the Terry Fox Run each year.

The fundraising begins in June and ends in September after the run concludes.

“When I started out fundraising for Terry Fox I would work during the day, then after work would go out with my pledge sheets and visit all of the homes and businesses in Prince Rupert and then in Prince George when I moved here,” wrote Terrion.

“I communicate by writing notes to my fundraisers or showing them my clipboard that has my pledge sheets. I enjoy getting everyone involved in fundraising,” he said.

He has received several honors to date, including acting as the torchbearer at the 2015 Canada Winter Games in Prince George,  the 1992 Terry Fox Run Certificate of Appreciation and the 2006 BC Community Achievement Award.

Terry Fox Run Prince George is looking to nominate Jim Terrion to the Canadian Disability Hall of Fame this year.