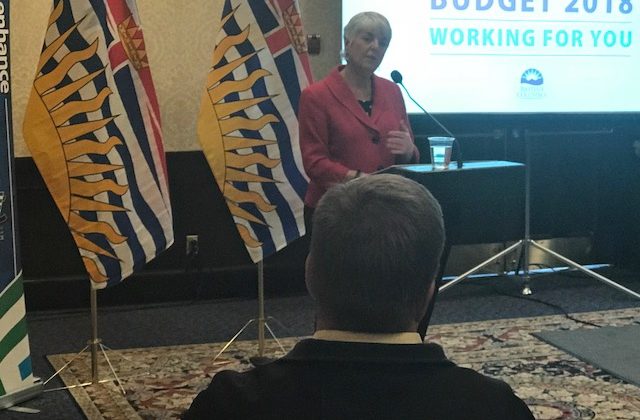 Carole James at a past meeting (MyPGNow.com staff).

The British Columbia Federation of Labour (BCFED) is positive about the future of the province, following today’s (Tuesday) budget meeting.

BCFED says that the changes have introduced new protections for some of the lowest-paid workers in BC.

By 2021, the Province intends to eliminate the server’s wage which BCFED Secretary Treasurer Sussanne Skidmore criticized as being “discriminatory”.

Skidmore also said that by the end of next year, British Columbia will have the “highest provincial minimum wage at over $15 an hour”.

Other topics of discussion included: funding to address homelessness, as well as initiatives to aid women and other under-represented groups access skills training.

Other low-income protections include the introduction of an up-front grant for post-secondary students, dubbed the BC Access Grant, and a small boost to earning exemptions for those currently on income support or disability.

However, the BC Poverty Reduction Coalition (BCPRC) expressed disappointment that those receiving disability or income assistance may still be unable to access educational opportunities.

Viveca Ellis, Interim Community Organizer for BCPRC, said that more progress is necessary to eliminate poverty in the province.

“The savings that have been calculated to our healthcare system and our criminal justice system are immense in the long run if we invest to truly make a dent in poverty.”

She also expressed concern that the stigmatization of impoverished individuals may be responsible for the lack of governmental change.