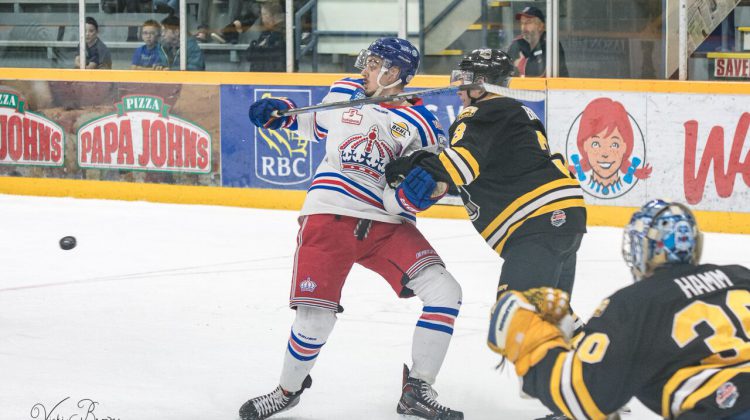 You wouldn’t have known it was the last game of the BCHL regular season for the Prince George Spruce Kings and Coquitlam Express on Saturday.

Both teams played their second high-intensity, playoff-like battle in as many nights with the Express coming away with a 4-3 shootout victory in front of 1,611 fans at the Rolling Mix Concrete Arena.

“I thought we did a good job this weekend, that is a really good hockey team and they are one of the top teams in Canada for a reason. We played a really good game on Friday too as I don’t think many teams can say they held Coquitlam to 16 shots. We fought and stuck with it, we’re feeling OK in the room,” said Alex Evin, Spruce Kings Head Coach.

The first period was highlighted by a blistering pace that took just 25 minutes to play as the opening period ended up as a scoreless draw.

A defensive breakdown proved costly for the Spruce Kings at the 1:42 mark of the middle frame as Greg Lapointe took advantage of a breakaway feed from Joey Berkopec, giving Coquitlam a 1-0 advantage.

The Express extended its lead eight minutes later courtesy of Noah De La Durantaye who ripped home a shot past a sprawled out Jett Alexander.

Hadyn Delorme sent the home crowd into a frenzy as he deflected his fourth of the season after a hard Colten Cameron point shot, handcuffing Coquitlam goaltender Joe Howe.

After Danny Pearson went bar down to make it 3-1 for the Express, the Spruce Kings picked themselves off the mat with two late goals of their own.

Corey Cunningham went backhand-forehand past Howe cutting the deficit to one with 5:04 remaining in the third period.

With Alexander pulled, Mason Waite ripped a point shot past Howe, tying the game at 3-3 after regulation.

Evin stated the grit and determination to fight back late is important with the post season right around the corner.

“We have done that a few times this year where we have come back and tied games late, we did it against Wenatchee and obviously there are no shootouts in the playoffs so we are not too concerned about those results. We are going to rely on these 58 games as experience for our young group.”

Alexander made 24 saves in defeat in his final Junior A regular season start.

Spruce Kings captain Nolan Welsh was kicked out of the game after getting into a fight with Coquitlam forward Josh Wildauer.

Prince George drops to 18-32-3-5 and will prepare for their first round playoff matchup against the Trail Smoke Eaters, which begins on Friday (36-17-2-2-1).

Nick Poisson is expected to be back in the lineup for Game 1 after sitting out the final weekend due to a minor injury.

The Schedule for the series is as follows: