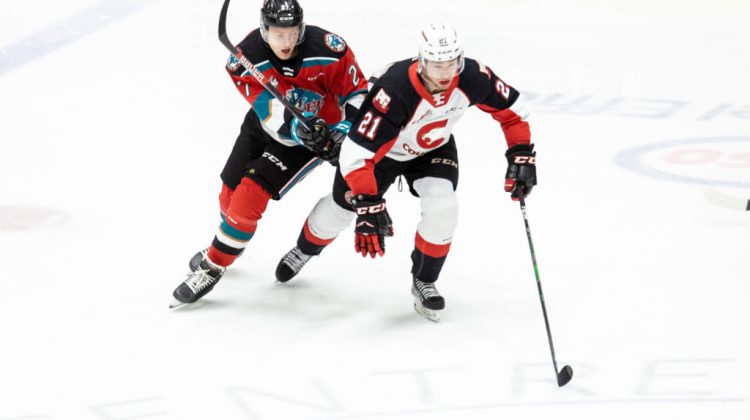 For every punch the Prince George Cougars threw at the Kelowna Rockets, the Memorial Cup hosts seemed to have an answer.

Dillion Hamaliuk’s second goal of the game proved to be the knockout blow on Tuesday as the Rockets launched past the Cats by 5-4 overtime score in front of 1,835 fans at CN Centre.

The signed San Jose Sharks prospect addressed his three-point game with MyPGNow.com as well as the Rockets uphill climb through the WHL standings.

“We’ve been going through a lot of changes, we have a new coach in and some new things have been implemented. I thought we played pretty well tonight, we had a slow start but got the job done so that’s good.”

“I was playing my style by taking pucks to the paint and I think that’s what gave me success.”

Kelowna jumped to an early 1-0 lead 3:46 into the first period, courtesy of Korczak who took a Pavel Novak feed and ripped it past Brennan.

Later in the period, Cole Moberg blasted his first of two goals on the man-advantage past Rockets netminder Roman Basran tying the score at 1-1 after 20 minutes.

It took 21 seconds for the Rockets to claim the lead back in the middle frame as former Seattle Thunderbird Matthew Wedman picked the corner on a slow-moving defensive coverage from PG to put the visitors back in the driver’s seat.

The game took on a whole different identity in the third with both teams scoring a combined five goals.

Hamaliuk lit the lamp at the 4:49 mark on the power-play, jamming the puck past a mad scramble in the Cougars crease.

Lady luck would be on the Cougars side as Moberg notched his second marker on the power-play deflecting off the glove of Basran and into the net.

Three minutes later, Connor Bowie was the recipient of a weird bounce as a shot from the Kelowna zone re-directed off a couple of bodies tying the game at 3-3.

“Korczak was just driving the puck, he turned it over and then I tried to put it on the net and fortunately it went in. It’s one of those goals where you work hard, you get a block and that’s what happened,” said Bowie.

Novak then scored his 22nd of the season with less than three minutes remaining let a squeaker past the armpit of Brennan for a 4-3 Kelowna edge.

In the dying seconds, Filip Koffer tied up the game with 19 seconds left, sending the game to extra time.

The overtime loss drops the Cougars record to 17-31-4-4, 12 points back of Seattle for the final wild-card spot in the Western Conference with two games in hand.

Moberg believes the only disappointment from the team’s effort was how they started.

“It wasn’t our best to start the game, we came out of the first tied and then we gave up a quick goal early in the second, we were down in the third but we battled back, which is good.”

“We knew we could battle, we never quit and we never gave up on ourselves. I just kept telling our guys that it’s not ever and we continued to battle.”

Kelowna is 26-26-2-3 and is 2-0-0-1 since Adam Foote was relieved of his head coaching duties last week and Kris Mallette took over on an interim basis.

Korczak, who is a signed Vegas Golden Knights prospect, believes the team is starting to turn the corner, despite a lot of turmoil.

“Obviously it’s been tough with the injuries and stuff, the coaching change was last week but we have adjusted well so far and we look to keep it going.”

The Rockets outshot the Cougars 28-24 overall.

PG went 2-for-6 on the power-play in a losing effort.

This is the sixth time in seven meetings Kelowna has beaten the Cougars this season.

Ethan Browne left the game in the first period and didn’t return to the game.

The Cougars called up 15-year-old defenceman Keaton Dowhaniuk, electing to scratch Marco Creta and Aiden Reeves from the lineup.