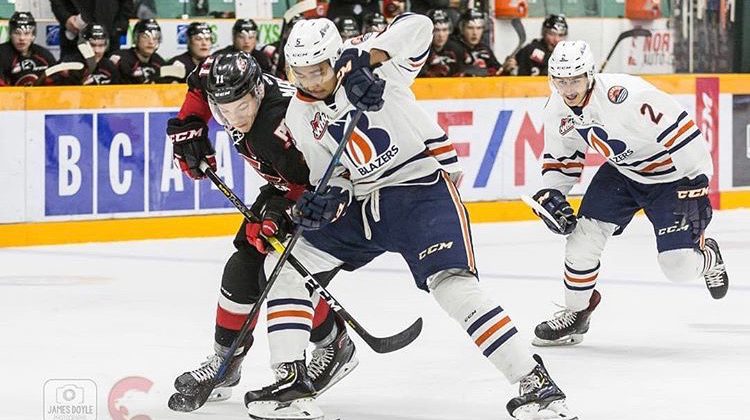 The 18-year-old forward was a thorn in the side of the Prince George Cougars as his three-point night (one goal, two assists) paced the Kamloops Blazers to an easy 6-1 win Friday night in front of 2,648 fans at CN Centre.

(Editor’s note: Zary originally had a four-point night but his assist on the last Kamloops goal was taken away after the game on an official scoring change)

The Blazers went to work immediately as Logan Stankoven drew first blood for the visitors scoring 2:22 into the first period adding his 27th of the season.

The 16-year-old star forward has lit the lamp 16 times since December 28th.

Stankoven told MyPGNow.com the adjustments he made after the Christmas break.

“After our road trip going into Christmas, I had to evaluate my game after the first half of the season realizing things weren’t good enough on my part so I did a few works to get my cardio up and get back to the skills I had to start the season. Hopefully, it carries over into playoffs.”

That’s 10 goals on a six-game goal-scoring streak for @LoganStankoven of @blazerhockey. The rookie has come to play in February!

Kamloops ended the opening 20 minutes with a late goal courtesy of Matthew Seminoff who buried his fifth of the season past Gauthier for an early 2-0 lead.

In the second, Zary struck on the power-play potting his 34th of the season extending the Kamloops advantage to three.

“We had to take advantage of what we didn’t do before and get to Gauthier early, he’s a really good goalie who has had great games against us this year so I think getting pucks to the net early on was huge for us,” said Zary.

To give you an idea on how badly Gauthier stoned the Blazers in the previous five games, the 18-year-old had a .954 save percentage and was named the first star in all three Cougar wins against Kamloops.

In the two defeats prior to Friday’s 6-1 drubbing, Gauthier was named the second and third star respectively.

Josh Maser cracked the shutout bid of Rayce Ramsay at the 6:58 mark of the second period from Ilijah Colina and Vladislav Mikhalchuk.

The Blazers restored their three-goal lead eight minutes later as Montana Onyebuchi scored his sixth of the year from Zary and Zane Franklin for a 4-1 lead.

To add insult to injury, Zary setup Orrin Centazzo’s 40th and 41st markers of the year putting the game further out of reach.

After the game, Maser admitted some injuries to key players like Jack Sander and Ethan Browne along with this being their fourth game of the week took its toll on them.

“Sander is one of our best penalty killers and our most defensive defenceman and Brownie is obviously a huge part of our offensive lineup who pretty much runs our first unit power-play. We are playing a well-rested group over there, they haven’t played all week and this is our fourth game. I think fatigue is an issue but we could have had a better effort tonight.”

Kamloops outshot the Cougars 49-21 overall improving to 36-17-3-1, nine points up on the Victoria Royals for the top spot in the BC Division.

“When we have lots of shots up on the scoreboard that tends to be when we play our best hockey, one of our goals is to get lots of shots, go to the net and crash and bang,” added Stankoven.”

The Cougars plummet to 17-33-4-4 and remain 11 points back of the Seattle Thunderbirds for the final wild-card spot in the Western Conference.

Both teams continue their home-and-home series tonight (Saturday) in Kamloops from Sandman Centre with puck drop at 7:00 pm.

Stankoven is expecting a battle from the Cats.

“We expect them to come out hard, we kind of took to them tonight and we know they will be pissed off so we just have to play the same way and we should be good,”