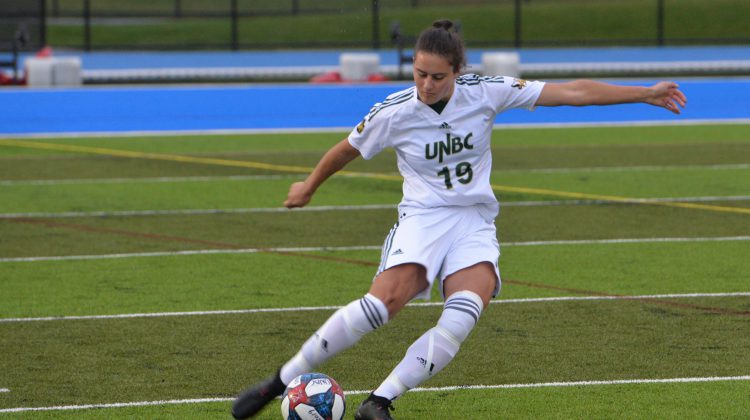 Mara McCleary has been honored as a Canada West All-Star for her efforts on the pitch after establishing herself as one of Western Canada’s top defenders.

She has also grabbed the UNBC Women’s Soccer Player of the Year and Best Defensive Player titles.

Originally from Victoria, McCleary is a leader for the Timberwolves, galvanizing her teammates in crucial situations, and showing a knack for ball distribution and joining the play.

The 5”9 defender is heading into her fifth and final season on pace to be UNBC’s all-time leader in games and starts.

“Mara has been a mainstay at the back for four years for us and has managed to get better every season. She has grown into her leadership role within the team and carries herself so well on and off the field. She was recognized by the conference for her impact, and we are looking forward to her final season,” said Coach Neil Sedgwick.

She is also looking at a fourth consecutive conference playoff birth.

Player of the Year! What a season for @UNBCWSoccer‘s Mara McCleary, who earned @CanadaWest All-Star status this year! On pace to be @UNBC‘s all-time leader in games and starts, she’s a leader for the Timberwolves and works hard for 90 minutes every single game. Congrats, Mara! pic.twitter.com/G4NdclxOBP