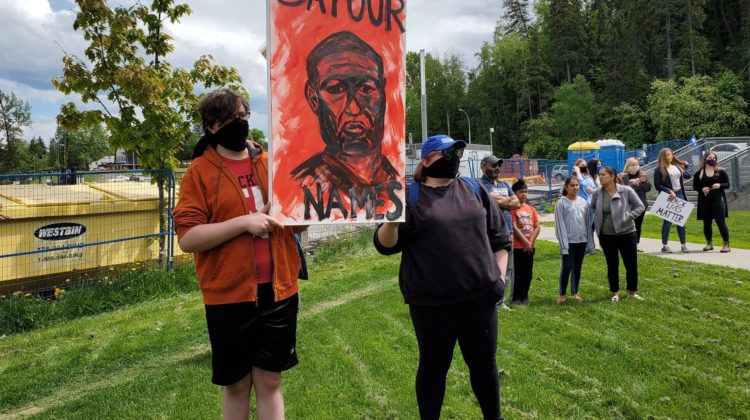 Mayor Lyn Hall opened the floor at the beginning of last night’s meeting for everyone to take a moment and share their thoughts on the now-international protests, sparked by the death of George Floyd at the hands of police in Minnesota on May 25.

The first demonstration took place downtown on June 5, then another at Mr. PG the next day.

“Black Lives Matter has put a spotlight on racism around the world, including Canada, and that’s a good thing,” said Councilor Murry Krause.

“This could be our opportunity to have a really meaningful conversation about racism in our community, and across Canada; I hope so.”

Councilor Frank Everitt followed by remarking how proud he is of local youth for undertaking the issue.

“Our young community came together and put a mark on the city, that Black lives do matter to each and every one of us,” said Everitt.

“We need to recognize those people who came out in our community because they are the future. I was very proud to be able to look and see the reaction. It was peaceful (…) and I believe that shows maturity on behalf of the community.”

“Racism and discrimination will not be tolerated and our community showed that in strength through the two protests that happened at the beginning of June,” said Councilor Cori Ramsay.

“I (…) would like to see the city open up a discussion with the Black Lives Matter and Indigenous groups to talk about how we collaboratively move forward. It’s time to listen, and it’s time to learn.”

Councilor Terri McConachie called the local demonstrations ‘sobering,’ also saying it was an honor to be in attendance.

“The murder of Mr. Floyd has sparked a rightful outrage in the southern, neighboring country and a demand for resolution, to reject racism in all of its forms,” she said.

“That roar has been generated around the world including in our own city with the Black Lives Matter peaceful protests,” McConachie noted.

She added that it’s important to talk to those in your inner circle about racism, because ‘real and lasting change can only happen when we do.’

Councilor Susan Scott said she wanted to reevaluate her personal understanding of racism in a statement read by Mayor Hall.

“Because we live in a culture of individualism, and with the privilege of freedom of speech, some people argue that their statements and ideas are not racist because it’s just personal opinion,” said Scott.

“It is important to point out how individualism can be used as a defensive reaction. That is why it is crucial to understand systemic racism and how it operates.”

She pointed out examples of systemic racism in Canada; listing the residential school system, the 1885 Chinese Immigration Act and ‘head tax’ and the 1923 Exclusion Act,

“Change and growth are not easy and moreover they are not optional. Now is our time, all of us, to take a stand.”

Councilor Kyle Sampson says at first, he thought it seemed like a no brainer that racism is wrong, but quickly realized that the Black Lives Matter movement encompasses multiple issues.

“Discrimination takes place in a number of different ways, and sometimes we don’t even realize it’s happening in front of us,” Sampson said.

“It can’t end with statements like this around a table. This can’t be the end of it, it has to be the beginning of our discussions. (…) We can do better and I think it’s time that we recognize that,” he added.

The two protests served as a catalyst for a larger movement said Councilor Brian Skakun.

“This really is a turning point. I don’t think there has ever been a time where so many people and so many countries have come together to speak out about racism and injustice,”

“I also think that we cannot ignore that this has been a wakeup call for law enforcement, for them to do things differently.”

Mayor Hall finished the discussion with some remarks of his own, saying in his mind there is no question that the Black Lives Matter movement is indicative that it is time for widespread change.

“There is something that struck me when I watched the news then and when I watch the news now, that this is a resonating moment and a change socially in our country and around the world. You get that feeling, that incident is resonating with everybody,” said Hall.

The third protest is scheduled for this Friday (June 16) at 2 pm in front of City Hall.