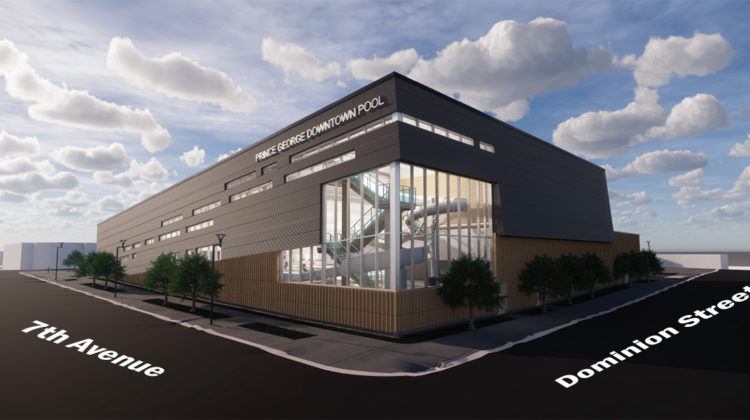 A rendering of the design of the new downtown pool from 7th Avenue and Quebec Street (Photo supplied by City of Prince George).

Both Federal and Provincial Governments are offering Prince George the largest infrastructure investment the city has seen in a decade.

The City of Prince George’s new downtown pool project will be receiving 10 million dollars from the Community Culture and Recreation Infrastructure stream of the Investing in Canada Infrastructure Program.

“The new pool will be a showpiece for our downtown; it will enhance accessibility to recreation programs, and provide jobs both in construction and operation. Due to our innovative Downtown Renewable Energy System, the new pool will also be energy-efficient and an exceptional example for British Columbia and Canada on how to provide aquatic services with renewable energy in a northern community,” said Lyn Hall, Mayor of Prince George.

Modelling conducted as part of the funding application shows heating the new pool with the City’s Downtown Renewable Energy System will reduce greenhouse gas emissions by 95% compared to natural gas.

Pool design and construction will take an estimated $35 million, while the remaining $7 million will be used to purchase the new site, and fund demolition operations.

The new downtown pool will be approximately 3,588 square metres (38,602 square feet) and will be built on 7th Avenue, between Dominion and Quebec Streets.

Crews will be mobilizing on the site of the new pool and starting excavation by the end of the month.