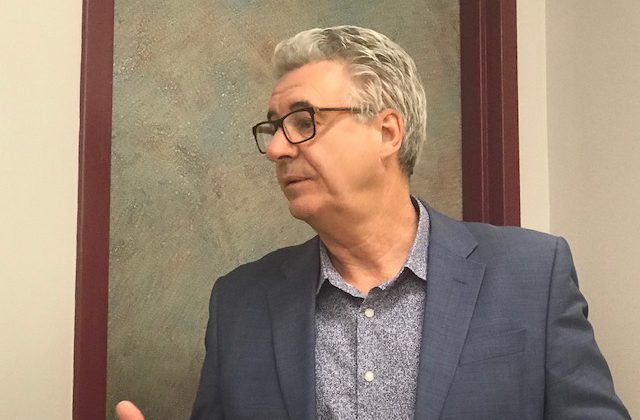 An Evacuation alert for several homes along Farrell Street in the area of Paddlewheel Park was issued over the weekend.

“We’ve certainly been on the edge over the last ten days, two weeks but we’re seeing water levels drop along the South Fort George area and we saw maximum height reached early Saturday morning but we are in much better shape. The forecast for the next few days looks to be positive for us when it comes to the flooding situation.”

The mayor also touched on what if anything can be done in that area, which seems to deal with flooding every other year.

“The houses are very low lying in that area as you know along the river and of course the park is right there on the river shore so I’, not sure what we can but you’re right it happens every couple years and this year was a bit of a surprise to us.”

“We do constant checks daily in that area along Farrell Street and Paddlewheel Park and at this point, we are not anticipating any evacuation and there hasn’t been any evacuation of residents along that area.”

In addition, traffic along Farrell Street is restricted to local traffic only.

Hall also expressed his disappointment on the recent washout along Beaverly Road east on Thursday.

“They are our neighbour and whenever you hear anything like that you’re concerned, you are concerned for the residents in the area and how they access their work, how do they access the Beverley area. There are a number of ways other than that particular location as they can access Highway 16.”

Hall noted the northern capital is far from alone when dealing with this sort of spring runoff.

“You look at what’s happening in Revelstoke and south on Highway 97 just south of Quesnel, the Cache Creek area and even go north to Dawson Creek we’re seeing in the surrounding areas, massive amounts of flooding, you know you escape wildfires one year and now we’re dealing with floods.”