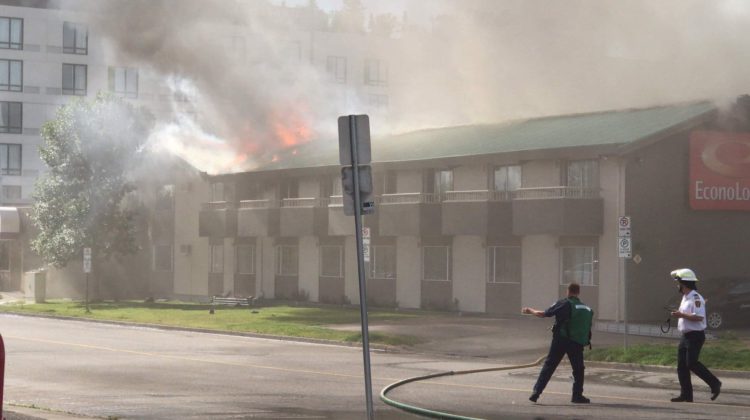 It was a rude awakening for some guests at a local motel.

Just before 9 A.M., emergency responders received a call of a fire at the Econo Lodge on 9th Avenue and Victoria Street in Prince George.

As of 10 A.M., the fire department is still working to extinguish the blaze.

“We were able to get out through the stairwell, but it was black – you could hardly see anything. It was hard [to breath]. It was really hard, I have asthma,” said Hannah Roberts, one of the evacuees.

“We heard some kids screaming before we opened the door, but there were no fire alarms going off – nothing,” she continued.

“I jumped off the balcony, held onto the edge and kinda looked down and did a tuck and roll.”

The Prince George Fire Department department has chosen not to comment at this time.

Here pictures of a fire taking place at the Econo Lodge downtown @pgfirefighters and @PG_RCMP are both on scene #cityofpg pic.twitter.com/YTUye1ogrU

.@pgfirefighters continuing to battle the heavy smoke following a fire this morning at the Econo Lodge @mypgnow pic.twitter.com/VeeurCeHib

Smoke and fire still very much active during this mornings blaze at the Econolodge in downtown PG #cityofpg @mypgnow pic.twitter.com/ticTJEBuIm

It’s that time of year again! Turn your clocks back one hour this weekend