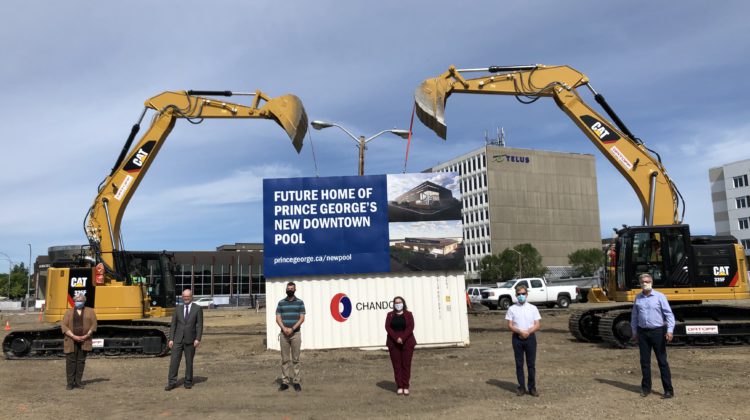 The planning of the pool has involved a lot of consideration for safety and accessibility for those facing disabilities.

Chair of the Prince George city’s accessibility advisory committee, Chris Gobbi added that many ideas were used to make the pool more wheelchair accessible, including beach-style entries to the pools and wheelchair pods to give those in chairs a completely independent swimming experience.

Gobbi added, “I feel the work city staff and the architect have done in designing the new pool has really raised the bar in regards to how buildings can and should be built in order to make them accessible to everyone.”

The new pool will also be in connection to the city’s Downtown Renewable Energy System (DRES), which provides heat sourced from wood waste at Lakeland Mills.

The downtown project valued at $42-million comes just a few years after a referendum was held in October of 2017, with 63% voting in favour of building the new pool.

We’re at the corner of 7th and Dominion where there will be new information released regarding the new downtown pool pic.twitter.com/m55e1ea2uh

Mayor Lyn Hall added that the project has been in the making for a decade now and it will be located on 7th Avenue between Dominion and Quebec Street.

The Four Seasons Leisure Pool is projected to be ready by late 2022.

Currently, the Four Seasons Leisure Pool and the Prince George Aquatic Centre are closed, however, the Aquatic Centre is expected to open for certain user groups on September 8th.