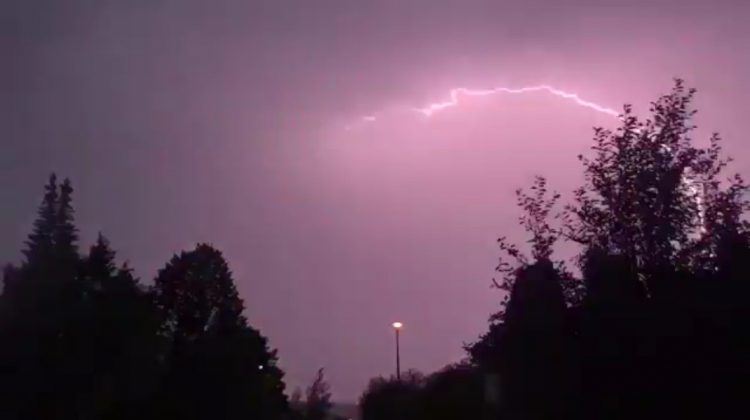 Thunderstorm sends lightning over the City of Prince George | (Photo by My PG Now.com staff)

The Severe Thunderstorm Watch that was issued in PG came to an end Friday night at 11:20.

A thunderstorm might be rolling through Prince George ahead of the BC Day long weekend.

“We’ve had a nice stretch of weather of the past week, however, that ridge of high pressure is weakening today and with all of the heat and moisture in place, it’s going to make way for some thunderstorms this afternoon and some of those could be severe in nature.”

“Fortunately, this is just a blip on the radar for the ridge as it builds back in this weekend and it’s actually going to be pretty pleasant until about Monday.”

Prince George could see up to 30 milllimetres of rain as a result.

The remainder of the weekend is predicted to be mostly dry with temperatures ranging between 18 and 27 degrees.

Some of these thunderstorms can produce strong wind gusts, heavy downpours, and large hail.

Lightning strikes could also increase the potential for wildfire activity.

The public is encouraged to monitor potential severe thunderstorm watches and warnings.