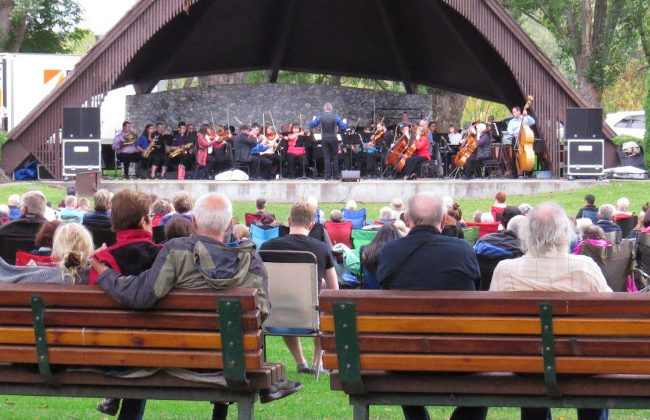 The Prince George Symphony Orchestra is looking for a permanent place to call home after 50 years of playing in multiple rented venues.

Representatives from PGSO floated the request to city council as part of their larger presentation on their 50th anniversary season, titled ‘bringing back the joy of live music.’

Organizers feel, after years of uncertainty, it’s time for something a little more concrete.

“The request to council was made on behalf of all of the performing arts groups in Prince George and, in some ways, on behalf of the city itself,” explained General Manager Teresa Saunders.

“We were making the point that the PGSO has existed for 50 years, through many ups and downs, and that should be celebrated (…) We are now looking to the future, to our next 50 years.”

In 1967, Vanier Hall was built as part of a centennial project that happened across Canada where concert halls were built in conjunction with high schools in communities.

“It is no longer viewed by the school district as a shared space, it is a teaching space. This means that it makes scheduling both rehearsals and concerts difficult,” Saunders explained.

Saunders points out the existence of the venue has allowed the city to put off constructing a city concert hall.

“We aren’t asking for the Taj Mahal. We are asking simply for a hall where good music and other arts productions can occur.”

A new concert hall could potentially help carry the performance load other venues are faced with as well, she added.

“It’s bigger than just ‘oh please, can we have a home?’ It still would be our home, we would still likely rent it from the city, but it would be a dedicated space for performance too,” said Saunders.

Councilors Kyle Sampson and Cori Ramsay both agreed to put it on their list of things to bring up at a future meeting.

For the 50th anniversary season, the organization intended on inviting several Prince George products to return to their home stage.

However, the pandemic forced the PGSO to rethink things, and a shortened season was put on the table once restrictions began to lift.

“We couldn’t go dark, we had to try and put on a concert season.”

The venue for the modified program will be the Prestige Treasure Cove Resort Ballroom, and each concert weekend will provide four concerts to an audience of 50 per seating.

There will be two chamber concerts and two small orchestra concerts.

“I think instantly it raises people’s spirits to know that it’s one more normal thing they can do. When people feel like all of the normalcy in their life is gone, the depression sets in,” said Saunders.

“We are finding a way to provide something that for many people, is just one of their normal activities.”