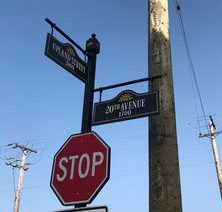 Prince George RCMP responded to multiple reports of shots fired on Upland Street near 20th Avenue this morning around 2:15.

Officers attended the scene, where they found an adult man suffering a single gunshot wound.

The man was transported to hospital with non-life threatening injuries.

An investigation led officers to conclude that the altercation happened when three people walking down the street had a verbal interaction with two males on bikes.

According to RCMP,  at least one of the two cyclists pulled out a handgun and fired towards the others, striking one of them, with the cyclist fleeing the scene.

Police do not believe the victims knew the suspects, and there is no evidence to indicate that this shooting is related to any other recent incident.

A police dog service team assisted other officers in searching for the suspects, however, none were located.

The investigation is ongoing.