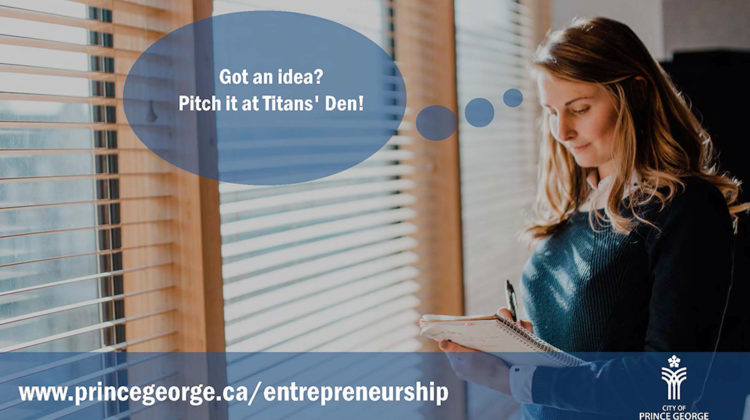 The City of Prince George is organizing a pilot event titled, “Titan’s Den” in efforts to give local entrepreneurs the chance to pitch their ideas and potentially receive financial assistance.

“We’re going to have 5 Titans in a room, then we will be bringing in pitchers individually, who can pitch their business or prototype idea to the Titan’s who will offer feedback and potentially a cash gift to take their idea, prototype or business to the next level,” explained Melissa Barcellos, Manager of Economic Development.

The Titans are a group of Prince George entrepreneurs with years of experience operating businesses and will remain anonymous during the course of the event.

“Unlike Dragons’ Den, the business leaders will not be taking any stake or control in successful projects as part of this initiative, nor will the event be televised or conducted in public, however, the City will be publishing the results of the event after its conclusion.”

The plan is part of the city’s 2020-2025 Economic Strategy,  specifically to connect entrepreneurs to one another, to mentors, and to capital providers.

“We’ve learned that there can be a big roadblock for startups when they’re trying to get funding,” she added, “there’s a limited amount of different investors locally, causing a lot of them to have to go into Vancouver or even the States.”

The event will be held at the Ramada Hotel on October 29th, officials are actively searching for potential ‘Titans’ for the coming years.

The City will measure the success of the event and then decide whether or not to hold more, to register or get more information, visit the Prince George Entrepreneurship site.

Got an really great business idea, but “if only” you had a bit of seed money to get it off the ground?

Get that dream aloft in the Titans’ Den – a new pilot project from the City of Prince George!