Forestry, homelessness and addiction; key issues for the NDP candidate in Prince George-Mackenzie 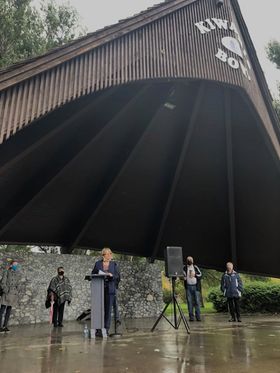 “The north and rural communities need a stronger voice in Victoria,” those are the words of Joan Atkinson who announced she will be running for MLA on behalf of the NDP in the Prince George-Mackenzie constituency.

“When John Horgan reached out to ask me for going for this role I jumped on the opportunity,” explained Atkinson.

She served on Mackenzie’s City Council for nearly 15 years and has spent the last 8 months working on the Mackenzie Timber Supply Coalition Group.

In her speech held today (Friday), she touched on a number of issues including overdose rates, homelessness and high-speed internet availability to rural communities.

In addition, she announced her support for the snap election, claiming “I’m confident that BC elections will do a fine job and this election will put nobody’s health in jeopardy.”

Despite the constituency electing a liberal MLA for the last few elections, with Mike Morris winning for the past two, Atkinson says, “I know my community is ready for a change.”

Joan Atkinson announcing she will be running on behalf of the NDP for Prince George-Mackenzie pic.twitter.com/e6twInG6UJ