The BC Wildfire Service joined forces with the Prince George Resource District to conduct a number of fuel management projects, with one on Pilot Mountain.

“This project was created because we identified some infrastructure that was on top of Pilot Mountain that’s critical in nature,” explained David Clark, Wildfire Technician for the Prince George Fire Zone.

This is part of an ongoing fuel management treatment plan to promote forest health and reduce the risk of wildfires in the area.

“Pilot Mountain had some work done in the past, but it’s been a while and the forest has sprung back up and we need to bring it back down,” added Clark.

Clark explained they will be creating a ‘fuel break’ or ‘gap’ between the infrastructure on Pilot Mountain and the Forest, which reduces the intensity of fires near structures.

Removing hazardous trees and flammable shrubs and thinning forested areas are just a number of steps being made to move the project forward.

The Pilot Mountain Project is expected to begin next week and will take around 3 years to complete. 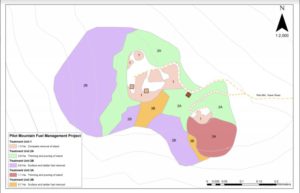