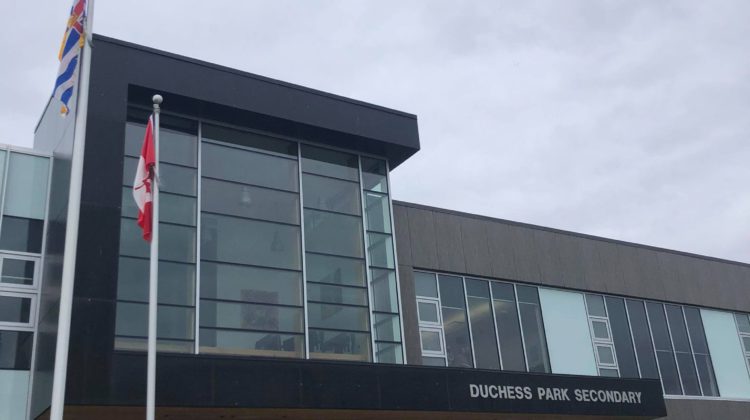 PG RCMP confirmed that the two incidents on Bellos Street today, are related to one another and are the reason why multiple schools across the city were placed under Secure and Hold (one step below a lockdown) today (Thursday).

They also confirmed that both incidents are part of the ongoing drug trafficking issue.

“The events of today started across town near D.P Todd and ended up closer to Duchess Park,” explained PG RCMP Corporal Craig Douglass.

“At 11:37 this morning the PG RCMP began receiving numerous reports of shots fired in the Bellos Street Area, once again after shots were fired in the same area early this morning,” noted Douglass.

Witnesses reported instances of a vehicle with multiple people pulling up to a residence, opening fire and then fleeing within a matter of seconds.

Police located the vehicle, which led to a brief pursuit that ended when a vehicle busted through a fence near Duchess Park Secondary where two people were placed in custody immediately after.

Three male suspects, aged 31, 34 and 40 are all known to police and will be held in custody overnight and will attend court tomorrow (Friday).

Two firearms were seized in close proximity to the vehicle.

A third person was arrested shortly after with the help of a Police Dog Service Team.

“This is 100% related to the same drug conflict that we’ve been experiencing over the last few weeks,” added Douglass, “there were schools in the area of Bellos and Duchess Park was in the area of where the collision occurred.”

Douglass explained, “all three schools were notified as soon as possible and put on a Hold and Secure but since then they have all been put off the Hold and Secure.”

All schools that had to take measures are now cleared.

The incidents reported on Bellos Street are related according to police.

A vehicle crashed through a fence off 10th ave and McBride Crescent.

All schools that had to take measures are now cleared. The incidents reported on Bellos Street are related. pic.twitter.com/ZnwaIilwdZ

A vehicle crashed through a fence off 10th ave and McBride Crescent. pic.twitter.com/1YtWIJQmlI

Duchess Park was previously under Hold and Secure following a police incident in a neighbouring area.

“D.P Todd and Heritage Elementary are still in a Hold and Secure situation related to some incident in a neighbouring area and not connected to the school,” explained Jason Peters of SD57.

“Right now Duchess Park is in an all-clear situation, it was in a hold and secure for about 25 minutes because of a police incident that was not connected to the school in any way.”

We have received reports that Duchess Park Secondary School is in lockdown following a police incident pic.twitter.com/MA7TfpalTE