LISTEN: From Prince George to the Stanley Cup, a special report with Jon Cooper 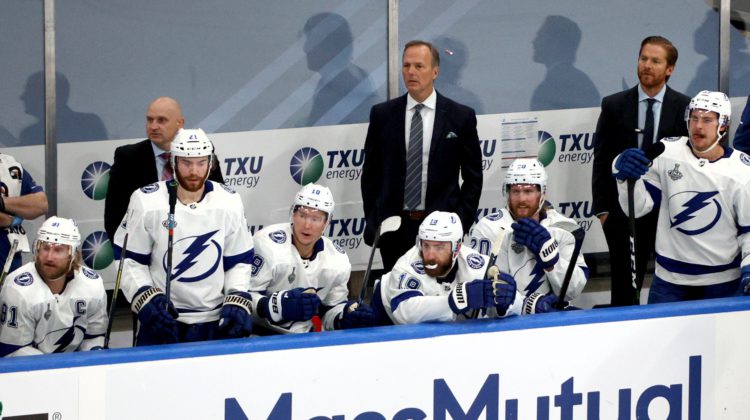 EDMONTON, ALBERTA - SEPTEMBER 23: Head coach Jon Cooper (C) and assistant coach Jeff Halpern (R) of the Tampa Bay Lightning look on from behind the bench in the second period of Game Three of the NHL Stanley Cup Final between the Tampa Bay Lightning and the Dallas Stars at Rogers Place on September 23, 2020 in Edmonton, Alberta, Canada. (Photo by Dave Sandford/NHLI via Getty Images)

“That was the hardest cup to win.”

That’s according to Prince George born Jon Cooper who is now a Stanley Cup champion as head coach with the Tampa Bay Lightning.

Before hoisting the cup on September 28, Cooper and his squad spent 90 long days in the NHL bubble in what is perhaps the most unusual post-season to date.

The Tampa Bay Lightning beat the Dallas Stars 2-0 to wrap up the 2020 Stanley Cup Finals in six games.

“It’s hard to sit here and say it’s sunk in until you actually are in front of the Stanley Cup and you get to lift it over your head. You just admire the trophy and the feeling it gives you,” Cooper told Vista Radio.

“There’s a commercial the NHL runs that says ‘no words,’ and it has players when they are interviewed when asked that same question ‘how does it feel?’ The players, basically they just kinda stutter. They don’t have anything to say. That’s how I feel,” said Cooper. “You have no words to explain.”

This year’s strange journey to the Stanley Cup was also considered to be one of the most challenging.

Cooper is not the only one who thinks so.

“Anyone who was there will one hundred percent say, yeah, there might be an asterisk beside that cup, but the asterisk is to only sit there and say that was the hardest cup to win.”

“It definitely was. Anybody, player or coach, will say that exact thing.”

Life in the bubble took getting used to, Cooper admits, but having some family in close proximity made things easier.

Players and staff were allowed to bring Canadian family members into the hub, but they were required to be tested for Covid-19 and isolate in the hotel while they awaited results.

Cooper’s brother and a friend traveled to Edmonton, but were unable to quarantine, so they were not officially allowed in the bubble.

However, they were still able to watch the games from the media concourse, away from the players and staff.

“At the end of the game, I got to point up there and wave at them. But they by no means could come down and celebrate with us or do anything,” recalled the Coach.

“They couldn’t celebrate with me but the mere fact that they were in the building, they made the trip, they stayed in Edmonton, that meant so much to me.”

Cooper’s parents had to watch the playoffs from their home in Prince George.

“I called my kids first. I face-timed them while I was on the ice, but I couldn’t get through to my parents, something was going on with their landline!” he said.

“Finally my dad answered his cellphone from the locker room. There was a little champagne being sprayed around.”

Cooper left his family on July 3rd for the restart of training camp in Tampa Bay.

From July 3 – 26, he was alone in Tampa before flying to Toronto to start the playoffs.

The Lightning spent 40 days in the eastern hub city and another 25 in Edmonton.

“It was basically 90 days away from the family,” Cooper explained. “It was a long time.”

One of the benefits of being in the enclosed environment was the fact he got to talk to people he would otherwise not have had a chance to.

“You’re with all these players, coaches, referees, that you would never really run into in any other circumstance,” said Cooper.

“There were no media there, so there was no one monitoring or watching every move you make. You could just be yourself. I also got to talk to people I never would have talked to just because circumstance doesn’t have you run into the GM of this team, or the president of that team. That was a really cool experience.”

Cooper said he even had a chance to converse with Commissioner Gary Bettman. 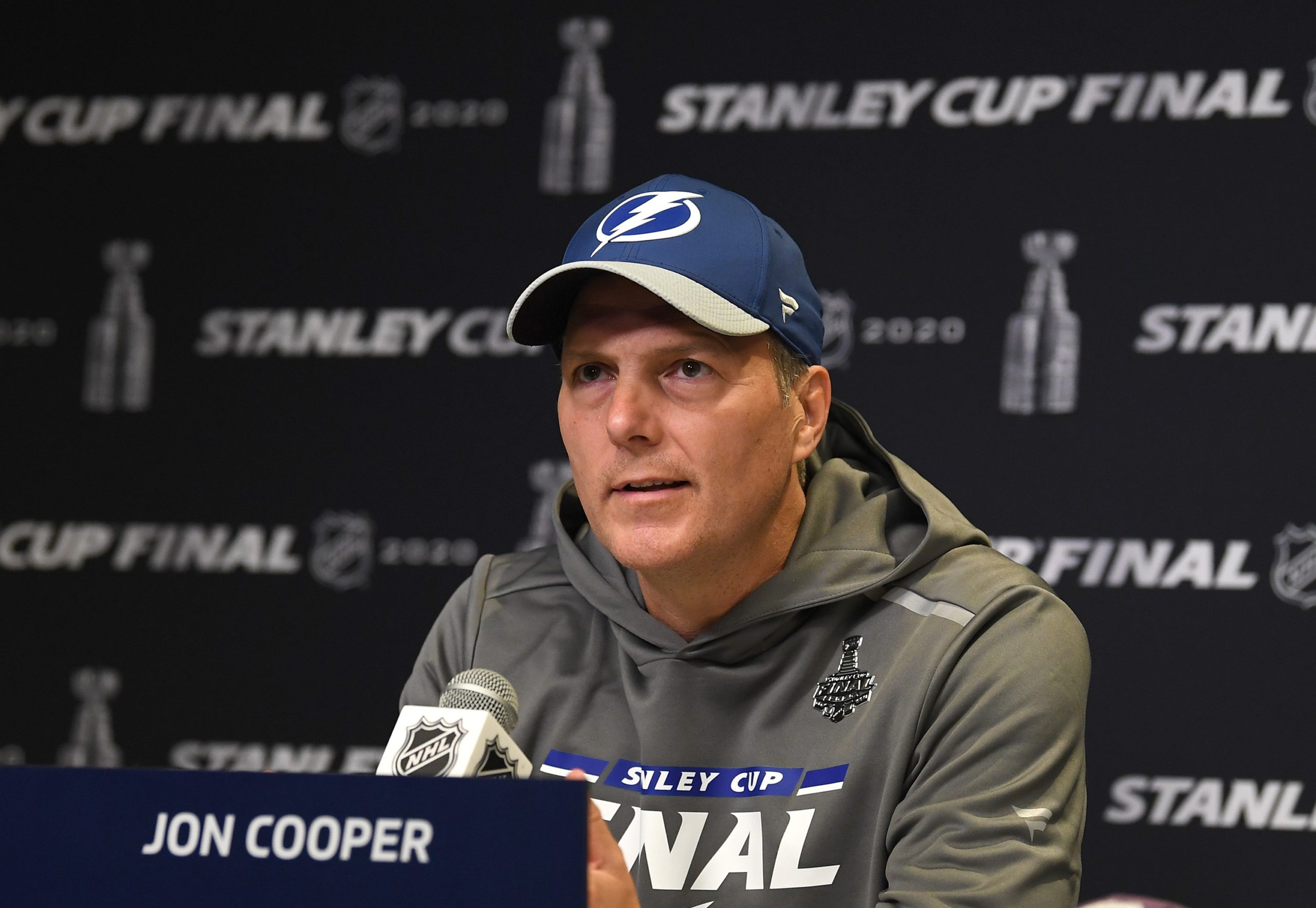 Coming back from disappointment

The Lightning made a surprise first-round exit in the 2019 playoffs when they were swept by the Columbus Blue Jackets 4-0.

Going into this season, Cooper says the defeat was in the back of his mind but it served as inspiration more than anything.

Cooper was inspired by the Virginia Cavaliers men’s basketball team who suffered from an equally disappointing defeat.

The following year, Virginia came back to win the title.

Growing up in Prince George

Like most young hockey players, he dreamed of one day lifting that 35-pound trophy.

He didn’t think that day would come as a coach.

“It’s not until you get older that you start thinking on the coaching side of things,” mused the former public defender.

“I remember I always used to say I wanted my name on the Stanley Cup. From a young age, I’ve always said that. I just didn’t know how I was going to do it.”

Despite his move, Cooper, who attended Spruceland Elementary and Lakewood Junior Secondary School, considers his home town to be a huge part of who he is, on and off the ice.

Cup not coming to PG

The Bolts bench boss secured what is widely considered to be the most difficult trophy in professional sports in his seventh full season as head coach.

Sadly, Cooper will not be bringing it back to Prince George.

“It’s a tough one, because you dream of that, bringing it home,” said Cooper. “During the pandemic, and these difficult times and the borders… it’s tough. I feel bad for our players because we have a lot of Canadian players, they may not get to experience their time with the cup in Canada.”

“Everyone in Prince George knows I am thinking of them, we probably won’t be able to bring the cup there in person but (I am) definitely there in spirit.”

Fortunately, the northern capital has seen the trophy before.

Brett Connolly brought it back in 2018, after winning the championship with the Washington Capitals.

Prior to that, New Jersey Devils winger Turner Stevenson took it home in 2003.

Winning the Stanley Cup is a career highlight for Cooper, who has now won a championship at every level he has coached.

“The hardest one is the first one, but once you hit one, boy does it drive you to try and get a second,” laughed Cooper.

That is exactly what he and his team will set out to do next.

– With files from Hartley Miller, MyPGNow