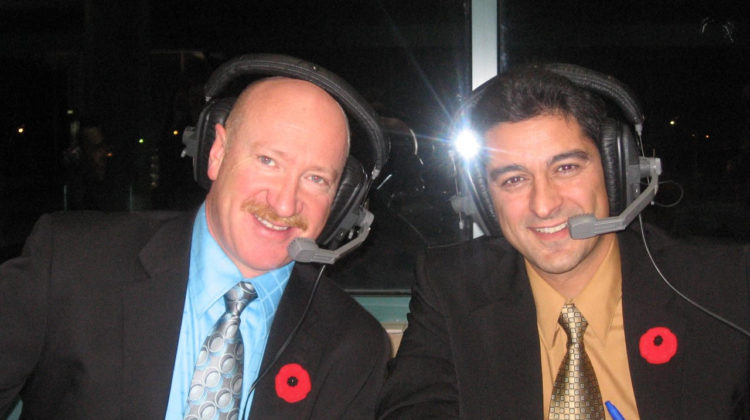 A former voice of the Prince George Cougars is being inducted into the Canadian Motorsport Hall of Fame.

Ron St. Clair of Prince George will be one of 15 inductees in this year’s class.

He was the official announcer at the Delaware speedway and for CASCAR.

“I’m especially proud to be going in 2020, alongside the others this year, because I happened to call most of their careers in one way, shape or form,” St. Clair told MyPGNow.

“It was actually quite a surprise because it was never something I dreamed of, I never chased it.”

St. Clair began his journey into broadcasting wanting to do play-by-play for the NHL, and fell into motorsports by chance.

However, he has been a fan of the sport since the age of twelve.

Early in his career, he got a job broadcasting drag racing in Saskatoon.

He returned home to London, Ontario and dropped a business card off at the Delaware Speedway.

“I got a call on a Wednesday, asking if I could come out and announce on Friday night. It was a track I went to as a kid,” he explained.

That meant he was familiar with the track and some of its history, but not the current roster.

“That was quite a thrill, I often said there was nothing quite like a Friday night at Delaware speedway,” St. Clair said.

The track, about 15 kilometers from the American border, was well-known and popular but very simple.

“We are going back into the ’80s so you had no computers at the time and there was no electronic scoring. It was all done by hand, I used a stopwatch,” the Hall of Famer explained. “It was just a thrill, when that microphone turned on, on a Friday night, it was just magic. You could sense it in the air, you could feel it.”

“The smell of onions cooking, the hotdogs, the hamburgers, the rubber from the track, the engines. Just all of that.”

St. Clair opened the sun valley motor speedway in Vernon in 2000, before the business folded and he returned to Ontario.

The following year, he applied for a position with the Prince George Cougars.

“I was told there were over 200 applicants, and the fact I wanted the position so I could be with my children was one of the reasons, I suspect, that I got the job,” said St. Clair.

He fondly recalls road trips to Kamloops and Kelowna with the team, where he would go to see his children.

“Sometimes at three o clock in the morning, I would jump off the bus. I had an arrangement with the hotelier, where they would slide the key under the door and I would slide them a fifty dollar bill,” he said.

“I was able to see my children and then catch up to the Cougars bus later in the day.”

In a career that has spanned nearly four decades, it’s tough to pick highlights.

One that will stick with him is accidentally playing the Bulgarian national anthem over the loudspeaker in lieu of Oh, Canada before a race.

“When I asked everyone to stand for the Canadian national anthem, no one seemed to recognize what was coming out of the speakers,” he recalled.

“One gentleman down front with his hat over his heart was singing away!”

He is still a few years out from retiring from his current position in car sales but is excited to start winding down.

“Outside of selling cars and trucks and SUV’s for the next few years, I’m eagerly looking forward to shutting ‘er down and relaxing.”

I would like to congratulate my friend @Ron St.Clair on his induction into the Canadian Motorsports Hall of Fame. Recognition well deserved.