Pair of Cougars looking to lead the way for Spruce Kings 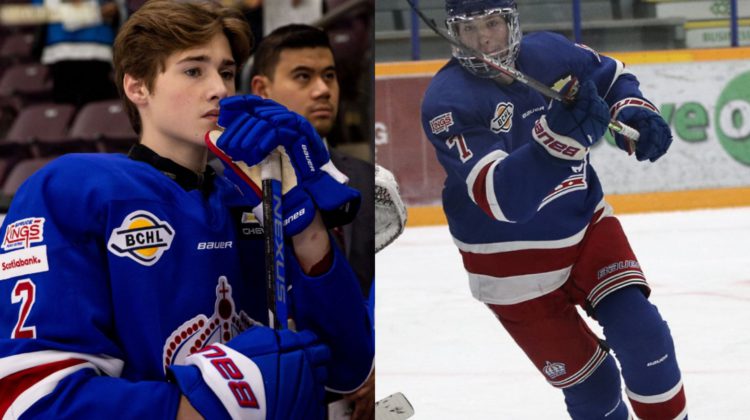 (Aiden Reeves (left) and Connor Bowie (right) are looking to make an impact with the Spruce Kings after being loaned by the PG Cougars. Photos supplied by Vicki Brown and Garrett James)

Connor Bowie and Aiden Reeves are getting the royal treatment with the Prince George Spruce Kings.

Thanks to the temporary player transfer agreement between the Western Hockey League and junior A, junior B, and U18 levels, both members of the Prince George Cougars are suiting up in the BCHL.

Bowie, a jack-of-all-trades type of player, is hoping the temporary stint will take his game to new heights.

The 19-year-old posted career highs with 12 goals and 11 assists for the Cats but admitted life with the Spruce Kings has been excellent.

“I’m just really happy to be playing and for a great organization like the Spruce Kings. I was really happy to play, and it (has) turned out pretty great. I’m kind of here under training circumstances so I am hoping to sharpen up my skills and get prepared, getting my hands and feet ready so (they’re) up to speed for the season.”

NEWS | The Spruce Kings have added F Connor Bowie ('01) and D Aiden Reeves ('02) to the roster on loan from the @PGCougars.

(Aiden Reeves is back for a  second tour of duty with the Spruce Kings. Photo credit: Chuck Chin)

While Bowie is dawning a Spruce Kings jersey for the very first time, the same can’t be said for Reeves.

He completed a rare feat by playing for all three local hockey programs.

Reeves started the season with the Cariboo Cougars where he was near a point-per-game pace.

Shortly after, he was called up by the Spruce Kings for eight games as the BCHL club dealt with a stockpile of injuries.

Finally, Reeves spent the rest of the WHL season with the Cats recording one assist in 12 games.

“I have lots of pride for Prince George, it’s a hockey city and it’s an honour to represent all three teams. It’s something not a lot of people are able to do and I’m proud to accomplish that.”

Reeves believes the extended look-see with the Spruce Kings will work in his favour.

The Spruce Kings are in the Kootenays this weekend for a trio of road pre-season games. PG plays the Cranbrook Bucks Friday and Saturday before wrapping up against the Trail Smoke Eaters on Sunday.

In addition, 20-year-old blueliner Mason Waite was named the Spruce Kings capatin today (Thursday) while Corey Cunningham and Kolten Cousins are the assistants.

The remainder of the leadership group will be named at the conclusion of the pre-season.

NEWS | We are excited to announce that 20 year old defenceman Mason Waite has been named team captain for 2020-21!

To see the rest of the 2020-21 leadership group, check it out in the thread! ⬇️⬇️#TrueBlue pic.twitter.com/j03AwV6p0t