“I like our mix,”: Spruce Kings head coach upbeat on upcoming season 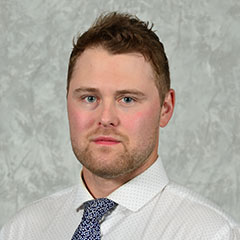 The BCHL’s most northern franchise looks to rebound from a tough 2019-20 campaign where injuries and a lack of goal scoring resulted in a 18-32-3-5 record in the Mainland Division, notching a league-low 150 goals.

So far, the Spruce Kings are showing signs of promise during the extended pre-season with a mark of 4-2-0-1.

Evin told MyPGNow.com a little more balance throughout the lineup could go a long way.

“I like our team. Obviously, I think we have a lot of potential, it’s still exhibition as some of our younger players are new to the league that is getting their feet under them and we still have some of our older guys trying to be a little more consistent.”

“We have a good chunk of guys that we like from last year that have good character and our management staff did a really good job acquiring some veteran players that we like suddenly we have a strong group of players with our young guys. I like our mix.”

Speaking of older players, Evin has been especially impressed with the performance of 20-year-old forward Andrew Seaman who has enjoyed a strong preseason with seven points in as many games.

After posting just 16 points in his rookie season, Evin is noticing a different level from the overager.

“For us last year, he was a new player to the league and I think it took him a lot of time whether it was adjusting to the speed or understanding how to be effective. I think he did a good job of that by the end of the year, he does have an offensive side and it’s nice to see Andrew get off to a good start.”

Goaltending is often the most important position on any junior hockey team, with the Spruce Kings being no exception.

Three netminders remain on the roster for PG including incumbent Carter Woodside along with a pair of rookies in Aaron Trotter and Jordan Fairlie.

Fairlie spent last season with the Cariboo Cougars of the BC Major Midget Hockey League where he posted a 10-7-1 record with 2.47 goals-against average.

Trotter, on the other hand, spent a pair of seasons with the Shawnigan Lake U-18 program sporting a 2.57 goals-against average and a .905 save percentage.

The 19-year-old starred in net during the Spruce Kings three-game Kootenay road swing where he made 13 saves in a 2-1 win Saturday over the Cranbrook Bucks.

Trotter showed well the following game on Sunday in a 2-1 shootout loss to the Trail Smoke Eaters stopping 20 shots.

In either case, Evin isn’t tipping his hand on who will be PG’s starting netminder.

“Whichever one can probably emerge as being consistent at the end of the day will probably play, they have been doing a really good job as they don’t have a lot of experience in junior hockey their attitudes have been great at the rink and they are learning through their experiences.”

Woodside hasn’t played yet this season due to injury.

The Spruce Kings wrap up their preseason Saturday against the Merritt Centennials.