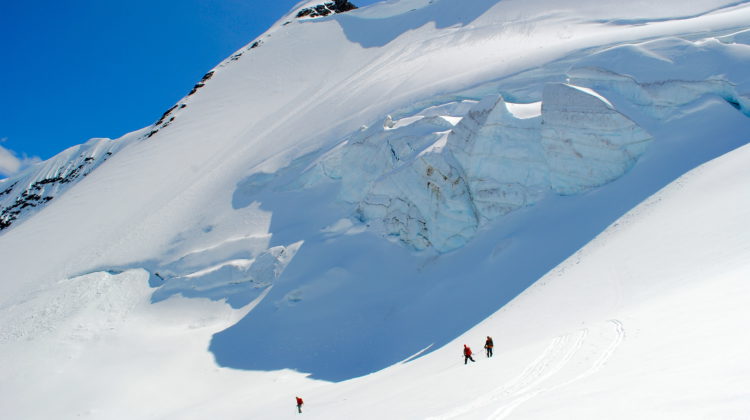 A new study out of the University of Northern BC found some nearby glaciers take up a lot more space than scientists had previously thought.

Glaciers in the Columbia River Basin, encompassing portions of seven states along with BC, are 38 percent thicker in mass according to the study.

Despite the misconception, researchers still predict the glaciers will disappear from the basin in 65-80 years, based on current melting rates.

The lead author on the case says the study has changed how scientists are able to measure the size of the ice giants.

“It is a good news story that these glaciers are a little thicker than we originally thought, but it won’t change their outcome by very much. For any given glacier it might buy us extra years or a few decades. But it can help us prepare for changing water resources in the region,” said Ben Pelto, who successfully defended his Ph.D. Dissertation on the subject.

“Our study aligns with evidence from separate studies which found that glaciers in the basin will lose 60 to 100 percent of their ice by 2100, depending on green-house gas emissions,” Pelto explains. “Disappearance of these glaciers will negatively affect the basin’s surface hydrology, freshwater availability and aquatic ecosystems, potentially affecting fish stocks and habitat.”

The first-of-its-kind research in the Columbia Mountains was published this fall in the Journal of Glaciology titled Bias corrected estimates of glacier thickness in the Columbia River Basin, Canada.

To get the results, the researchers calculated the glaciers’ true size by using ice-penetrating radar, towed by skis, to measure ice thickness over five glaciers in the Columbia Mountains from 2015-2018.

That data was then combined with two previous surveys on glaciers in the Rocky Mountains.

Five of the seven glaciers the researchers studied lie within the Columbia Mountains, including Conrad, Kokanee, Zillmer, Illecillewaet, and Nordic glaciers), while the West Washmawapta and Haig glaciers are in the Rockies.

After analyzing more than 34,000 data-points measured over 182 kilometres, they found that glacier thickness is, on average, 38 percent thicker than previous computer model estimates.

They also calculated that the ice volume for the Upper Columbia Basin is 122.5 ± 22.4 km3, equivalent to five times the volume of Okanagan Lake, which is 23 percent greater than the range of previous estimates.

The research was supported by the Columbia Basin Trust, Pacific Institute of Climate Solutions, Natural Sciences and Research Council of Canada, Tula Foundation, BC Hydro, and the University of Victoria.