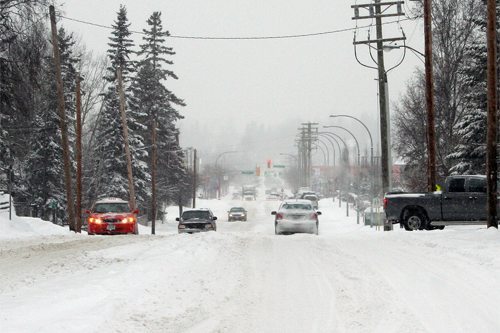 According to Environment Canada, A weather system will track through the central interior today (Friday) giving snow to most of the region.

Snow over the McGregor and Yellowhead regions will continue today as well over the Yellowhead Highway.

Further snow accumulations of 5 to 15 cm are expected except possibly reaching 20 cm over the Yellowhead Highway by late tonight.

Over Prince George, Stuart – Nechako regions and the southern sections of Lakes District, the snow will taper off to a few flurries this evening with total amounts of 10 to 15 cm expected.

Visibility may be suddenly reduced at times in heavy snow.

It will likely be a wintery weekend according to Environment Canada.

An approaching weather system will track through the central interior tonight (Thursday) and tomorrow (Friday) and residents can expect between 15 to 20 centimetres of snow.

Snow over the McGregor region will continue tonight and snow over the Yellowhead region as well the Highway will start this evening.

Over Prince George, Stuart – Nechako regions and the southern sections of Lakes District, Snow from the system will start overnight and become heavier on Friday.

The snow will taper off to a few flurries Friday evening with total amounts near 15 cm possible.

“Be prepared to adjust your driving with changing road conditions. Visibility may be suddenly reduced at times in heavy snow,” reads the warning from Environment Canada.

This includes a warning for the Yellowhead Highway from Tête Jaune Cache to the Alberta Border.

With files from Hartley Miller