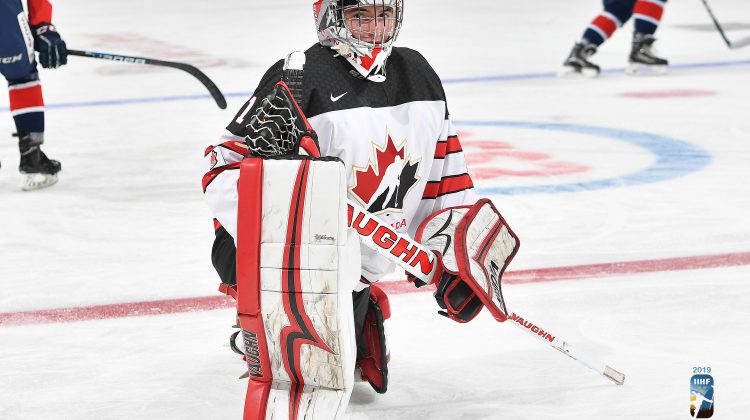 Prince George Cougars netminder Taylor Gauthier is quite happy to live out his childhood dream of wearing the maple leaf at the World Juniors.

The tournament kicks off Boxing Day for Canada when they play their opener against Germany in Edmonton.

Gauthier told MyPGNow.com he’s not taking his foot off the gas after making the team.

“The hard work starts now and I am just trying to win that starting job now.”

The 19-year-old now has his eyes set on being named the starting goaltender over teammates Devon Levi and Kamloops Blazer Dylan Garand.

“It’s going to be a battle between us three goalies that are still here. We are all here for a reason and that is because we are good goalies, I just have to go in everyday practice like it is a game and show that I have what it takes to win every night.”

Taylor’s first meeting with Pogge the year he was on the World Junior Team. He could barely say anything, he was so awestruck . Pogge was kind of taken back that Taylor went out for Halloween as him that year. pic.twitter.com/L8n1eGwOJA

Gauthier is quite excited to share the international stage with Garand, a colleague with whom he has had many battles within the BC Division.

“We have had quite a few good battles along the way in the last couple years, we have a ton of respect for each other and we both have the same goal, and the reason we both made the team is that we are two really good goalies. It’s nice to have him on the same team and not have to worry about stopping 40 out of 41 shots to win a game.”

It will be a bittersweet experience for Gauthier, even though he is playing in his home province of Alberta, not having the friends and family in the crowd will sting a little bit.

“It will be a different experience not having fans or family and friends watching but we all have the mindset to go out and win gold whether you have fans in the stands or not the gold medal will still taste just as good. At the end of the day, it will not give us an excuse.”

“Going back to the Hlinka when it was in Edmonton I thought it was pretty special playing in your home province and once I heard the World Juniors were going to be in Edmonton I set a goal of doing everything I could to make sure I was on the team. It definitely adds a little more value to make the team being an Alberta boy is more special than maybe if it was over in Europe.”

The road hasn't been easy, but today our guy accomplished one of his childhood dreams. Never give up, kids 😤#WorldJuniors | #WHL

Gauthier will no doubt go into the tournament with a chip on his shoulder, after getting passed over in the NHL Draft the last two years.

The back-to-back disappointments have certainly added some fuel to the fire.

“Going undrafted two years in a row isn’t something I had in mind for myself, it was just a little diversion in the road. Once I didn’t get drafted I think making this team was my biggest goal and to give myself the best chance of moving on and playing at the next level that’s been a dream of mine to play professional hockey for as long as I can remember.”

“It’s a huge honor to represent my family, my friends, and everybody that has supported me in the beginning. I am super excited to get things going here.”

He becomes the seventh player in Prince George Cougars’ franchise history to play for Canada at the World Juniors.

The last Cougar to suit up was Brett Connolly in 2012.

Gauthier’s teammate Filip Koffer is representing the Czech Republic in the upcoming tournament.

Cougars TV chatted with forward Filip Koffer about life in the bubble in Edmonton and preparing for the #WorldJuniors.