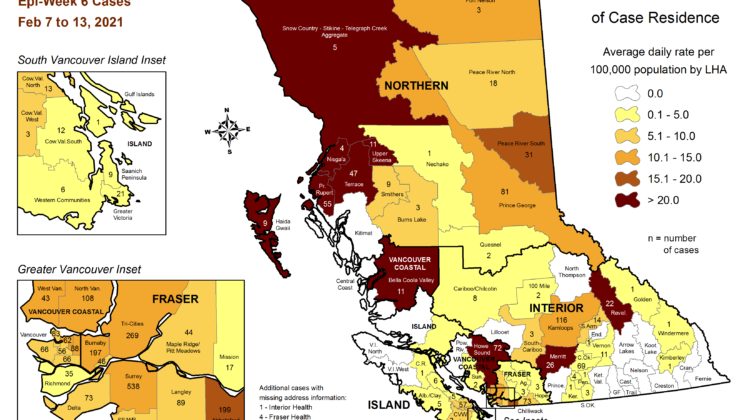 Regional Exposures (Photo by BC Centre for Disease Control)

Prince George saw a slight decrease in identified cases of COVID-19 within the past week, seeing 81 cases between February 7th to 13th.

This comes after the region saw 86 cases between January 31st to February 6th.

According to the BC Centre for Disease Control, 10 to 15 cases per 100,000 people are being reported in the PG region.

The Cariboo-Chicolton region, one of Prince George’s South-West neighbours, saw a substantial decrease in cases seeing 20 fewer cases this week than the week before.

Just West of PG in the Nechako region, only one case was identified this past week, dropping significantly as well from the week’s prior mark of eight.

However, the numbers were on the rise in the Peace River South region, seeing 31 cases in the past week, 12 more than the week before.

The Quesnel region’s case count remained stagnant with only 2 cases identified a week for the last two week periods.

There are currently two health care outbreaks in Northern Health, one at the Acropolis Manor in Prince Rupert and the other at the Dawson Creek and District Hospital within the Medical Inpatient Unit.