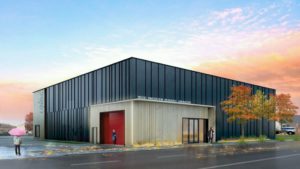 “Over the course of the first two weeks in February, when temperatures fluctuated between -1 and -37 degrees Celsius in Prince George, the heating demand in the Wood Innovation Research Lab only fluctuated 3.5%. We barely noticed any change at all,” said Claus.

Claus compared the heating demand to the demand from the main campus, which doubled during this time.

The lab is nearly 10,000 square feet and ten metres tall but is the heating bill is similar to a 1,600 square foot house.

Claus explained the main reasons for this performance are the 50cm thick walls filled with insulation and the details that make the building airtight.

According to the City of PG, the lab wasn’t the only project that thrived during last week’s chilly weather.

The City’s Downtown Renewable Energy System is entirely operated by renewable energy in the form of sawmill residuals from Lakeland Mills.

This ‘wood waste’ is burned to heat hot water, which is used to heat nearly a dozen buildings downtown, but specialized equipment at the mill keeps emissions very low.

A 2020 Natural Resources Canada study shows that the Prince George system is one of the largest and the only one of its size that operates with no help from fossil fuels in all of Canada.

This means that the greenhouse gas emissions linked to heating city buildings with natural gas have dropped 30-40%.

The drop began in 2012 when the system became operational and became the single greatest contributor to reducing emissions in PG.

City Hall, the Library, Two Rivers Gallery, the RCMP Detachment, the Law Courts, and the Wood Innovation and Design Centre are heated with the system, which equates to about 660,000 square feet of building space.