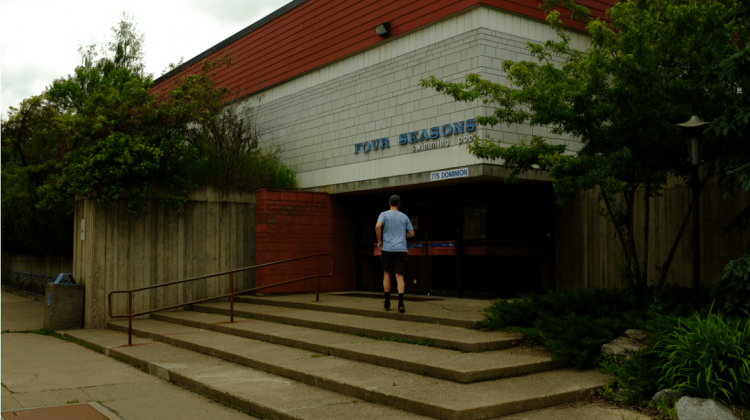 Located across Dominion Street from Fire Hall #1, the Four Seasons Leisure Pool was built in 1970 and is nearly 50 years old. (Photo supplied by City of Prince George)

So long and thanks for all the fish.

In its current idle state, about $459,000 is being spent on the FSLP for maintenance.

“Eventually, we are going to have to say goodbye to this facility, so I’m wondering if we can do it sooner rather than later,” said Councillor Cori Ramsay during discussions.

This means residents will be without a pool for about five weeks when the Aquatic Centre closes for maintenance.

However, it was pointed out the pool was already scheduled to close when the replacement became ready, with several Councillors likening the motion to ‘ripping off a bandaid.’

“We went March to September without pools at all. It was tough on our community, but we did it. I struggle with the thought that we couldn’t possibly bear it for five more weeks if we had to,” said Councillor Kyle Sampson.

Administration will bring forward a report on demolition details at a future meeting, including the implications of demolishing the old fire hall at the same time.

Meanwhile, the new pool is scheduled for an upgrade.

Council approved the purchase of an obstacle course for the pool replacement, worth about $500,000.

This includes $25.5 million in MFA debt and $10.75 million in grants from the Investing in Canada Infrastructure program and the Fraser-Fort George Regional District.

The remainder of the $10 million grant will also be spent to pay down the amount the City will have to borrow to pay for the new pool.

The new pool, about twenty-five percent complete, is budgeted at $35.75 million, with about $9.1 million expensed to date.

The cost for the obstacle course would be taken out of the grant money, a report to City Council says.

With the proper maintenance, the obstacle course is expected to last about 20 years.

Most Councillors were on the fence about the proposal, however, the motion passed 7-2 in the end.

“I was reluctant to ok this, but I will support this tonight. There are going to be a lot more things to do at the pool besides swimming,” said Councillor Brian Skakun.

If you look at that obstacle course those kids are on, I don’t know if any one of us could do it. It looks like it’s pretty intense exercise,” he added, referencing a video presentation made to Council.

Councillors McConnachie and Frizzell were not in favour of passing the motion right away but said it was something they were open to in the future.

“It would be a cool addition. But I think it’s a ‘nice have’ with a really hefty price tag,” said McConnachie.

“It’s good that we are on time and on budget now, but we’re barely off the starting block in my opinion. We have a long way to go. I don’t want to be negative but I want to be realistic.”

The Four Seasons replacement is slated to open next year.