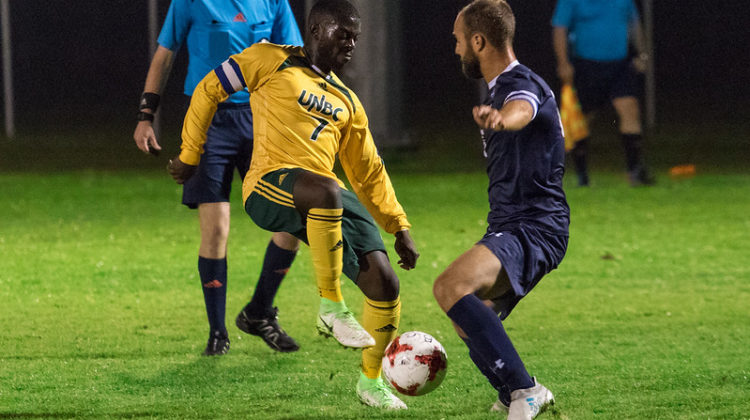 When you talk about men’s soccer at UNBC Tofa Fakunle is one of the first names that come to mind.

He is considered one of the most beloved athletes in Timberwolves mainly due to his leadership, work ethic, and personality – making him an obvious choice for the Wall of Honour. 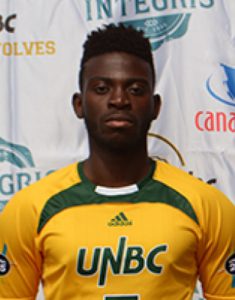 Fakunle was originally recruited to UNBC by former head coach Alan Alderson in 2013 with tremendous expectations.

He had been highly recruited by a number of the major programs in the conference but decided Prince George was the perfect fit.

“He was immensely polite before training, and then he was the most intense in training. He held himself to high standards, but he also went out of his way to make sure those around him were playing all out. His personality could fill a room, either with intensity or with a smile that could brighten the entire building. When I got the job at UNBC, he was instantly on my ‘find a way to get him here’ list. I knew he was the kind of player that would play a significant part in building a culture of excellence and winning together,” said Alderson.

In his freshman season, he led the Timberwolves in goals and points, earning the program’s Golden Boot Award and UNBC Male Rookie of the Year Award.

The following year, Fakunle again paced the TWolves in points, leading the program to a record-high in wins and points.

In the summer of 2015, Alderson was replaced by Steve Simonson as head coach, which led to a shift in playing style, direction, and culture.

Fakunle reached new heights in 2016-2017 where he broke program records for goals and points in a season.

In an interview with MyPGNow.com, He recalls a specific meeting where his leadership qualities were called into question.

“Steve basically came at me and was questioning what I was doing this for and put it into my mind into what being a leader is all about. That changed my mindset and I think that was the switch where things started to change for me where I started to put the team first instead of myself.”

For his efforts, he was named T-Wolves Most Valuable Player and had his name etched on the UNBC Male Athlete of the Year Award, while also earning U SPORTS Academic All-Canadian status for his work in the classroom.

The Calgary product then helped the Timberwolves to their first Canada West playoff appearance in program history.

Fakunle hopes his example of hard work and dedication can continue to translate into society.

“It means a lot to be a trail-blazer, to be an example that other people can look at. I hope I can continue to do that for people in sport and in life as well. It means a lot.”

Fakunle concluded his career as the Timberwolves’ all-time leader in goals, assists, points, shots, and game-winning goals while sitting top-five in games played and starts.

However, he noted none of the accolades would have been possible without the help of his teammates.

Like many young athletes, Fakunle had several role models growing up, most notably the late Kobe Bryant who turned out to be one of the best NBA players of all-time for the Los Angeles Lakers winning five titles in his illustrious career.

“Just watching him play, I could see how much he wanted to win and the desire he had. When you are an athlete and you grow up watching other athletes – elite athletes who have that drive and innate desire to succeed you want to emulate that.”

Fakunle will also be forever thankful for sharing his UNBC journey with lifelong friend Francesco Bartolillo.

“I remember we played as Team Alberta (as kids) and I broke my leg. He came to my house and was the hero all the time just making sure I was OK and that is how our friendship developed. We have a good bond, a good friendship and I am highly appreciative of him. I hope he gets on that wall too.”

Fakunle also suited up for Cavalry FC (based in Calgary) of the Canadian Premier League.