One week ago I lost a friend.

Glen “Moose” Scott was full of life before losing his battle with cancer at age 75.

His gigantic friendly presence was felt the moment he entered a room.

Glen loved his sports, telling stories, and to go with it, a rum and coke.

For added effect, he never hesitated to greatly embellish many of those stories.

Never one to let logic get in the way, I would not say he was a rational fan but he was passionate about his favorite teams.

You would feel his wrath if you dared to try to give an opposite view to his way of thinking.

Below is that column which is in italics

Glen “Moose” Scott is a “one-of-a-kind” colorful character who takes his sports seriously.

On the surface, “Moose” appears to hold a gruff, overpowering, and even intimidating personality.  However, underneath this rough facade lays a committed family man, with a big heart who enjoys everyday living, such as watching lacrosse or hockey at the Coliseum or football on the big screen in the comforts of his Pineview home.

“Moose” was one of the first individuals I met after arriving in Prince George in 1979. He is not only recognizable throughout the sports community but in the political arena as well serving two terms as a city councilor (2002-2008).

As a radio listener of mine, “Moose” admits he tunes in regularly because as he puts it “somebody has to check to make sure you are getting it right”. You see, Glen was a sports director on CJCI (now called the Wolf) in the 1970s.

Later, he stayed on the airwaves doing morning ski reports and wrote a sports column for the old “Prince George This Week” newspaper. In other words, he has experienced my position, so he believes he is a sports authority on what the media reports.

“Moose” doesn’t always respond well to opposing views, especially on his favorite teams. He is a staunch BC Lions fan, a huge Seattle Seahawks fan, an avid New York Yankees booster, don’t ever mess with his Vancouver Canucks or for that matter his Prince George Spruce Kings. He is loud and proud to hand out Spruce Kings business cards with Sales and Marketing clearly advertised. 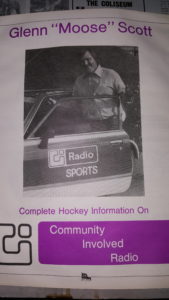 Glen has been known to throw objects at the TV set when his team loses a big game, but now in his golden years, he just smashes the clicker instead. In addition, he spent many years as the track announcer at PGARA, with that rare ability to make a lopsided race sound close and exciting.

Years ago I had many run-ins with “Moose” on the executive in the Prince George Ball Hockey League. He was my biggest adversary and continually suggested that his big, physical, bruising team that had limitations, was getting the “short end of the stick”, while my team was receiving preferential treatment. Of course, nothing could be further from the truth, but to this day, “Moose”, who was an organizer and player, still feels a bit slighted.

Glen, raised in the Lower Mainland, has been a PG resident for nearly half a century. He is an individual who doesn’t pretend to be a technical wiz and still loves doing things the old fashion way, often reporting results by phone.

“Moose” has made Lacrosse a family affair. His wife (Pat) is a league scorekeeper and announcer, son (Chris) is a goalie and grandson (David Lukoni) is a defenceman for the Shooters Pub Devils and daughter (Lisa) is the president of the Quesnel Lacrosse Association. Another daughter (Tammy), has little choice but to be a big Lacrosse booster.

Two years ago, “Moose” was given a Community Sport Hero Award from Sport BC for years of service to local lacrosse, including the last 23 years as PG Senior Lacrosse Association President/Commissioner.

Glen calls the radio station answering machine and gives a full broadcast recapping that night’s game. He always starts his report by saying, this is from PG Senior Lacrosse for day/date and “it goes like this..”

Glen will ramble for a good three minutes in full reporter mode knowing I am the only one hearing the extent of his play-by-play.

As a watchdog and biggest critic, “Moose” isn’t afraid to highlight my mistakes. He was taken aback when I suggested the CHP Assault would sweep the Devils in the best of five final. When Shooters Pub won game three in double overtime to avoid the sweep, Moose couldn’t wait to rub it in that my prediction was a tad misguided. I then suggested to Glen that the Assault would crush the Devils in game four by more than five goals. That didn’t sit well with “Moose”, who insisted “you don’t know what you are talking about”. Well, CHP did win 23-5, but Glen still had to have the last word and say “Hartley was wrong because the sweep did not happen.”

Although “Moose” has been battling health issues, no one, not even doctors can keep him away from his sports, including football pools (NFL) which he believes he is savvy when making his picks; in reality, he struggles to forecast winners.

“Moose” may be illogical at times and engaging in a rational discussion about his sports teams may be out of the question but his presence is unique and undeniable. He is an everyday sports fan that admits “I am just enjoying life to its fullest and have no regrets.”

Sure, he can be controversial, cantankerous, and crusty but it is incontestable that Prince George is a better city that has benefitted greatly from having “Moose” as a community-minded patriotic citizen for the past 49 years.

The above was written nearly eight years ago but the moral of the story remained the same until his last day.

Council starts the meeting by sharing memories of Mike Benny and Glen “Moose” Scott. Both men were prominent community members in Prince George, who passed away recently. #CityofPG

Glen “Moose” Scott was a character, mega personality, an icon, and a true legend.

We, the residents of Prince George, were lucky he was on our side.

The NFL has offered NFL stadiums as vaccination sites. Well, except for the Jacksonville Jaguars’  stadium. Everyone knows they don’t have a shot.

Mason Rudolph and Eugenie Bouchard have a confirmed romance, I heard, however, that after a recent spat between the two, she was on eBay bidding for an autographed Myles Garrett helmet.

NHL Outdoor game between Golden Knights and Avalanche stopped after the first period, had to be rescheduled to restart at 9 pm PT after sunshine caused deteriorating ice conditions earlier. So add to 2021 insanity… a major professional sporting event postponed because the weather was too good?

Czech Republic free-diver David Vencl set a Guinness World Record by swimming 80.9 metres under the ice. Not to be outdone, the Montreal Canadiens fired coach Claude Julien — effectively throwing him off the ice.