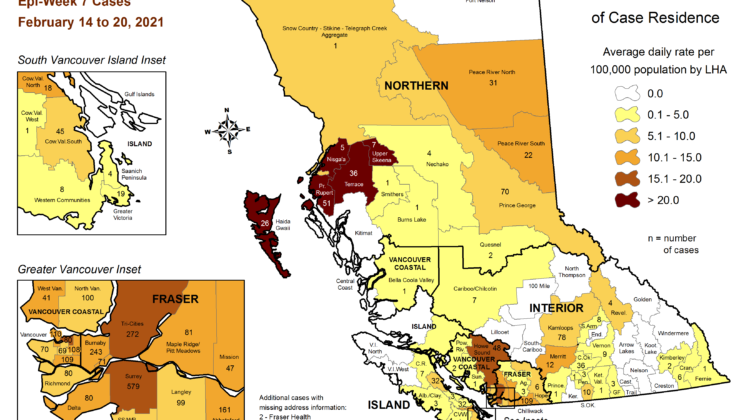 Regional Exposures (Photo by BC Centre for Disease Control)

The number of COVID-19 cases identified in Prince George continues to trend downwards after the region saw 70 cases between February 14th to 20th.

This is 11 fewer cases identified than the week before, the mark has been dropping since 86 were reported in the first week of February.

According to the BC Centre for Disease Control, five to ten cases per 100,000 people are being reported in the PG region.

However, the Peace River North region saw quite an increase of 13 new cases this week after reporting 31 cases.

The Nechako and Quesnel Regions remained relatively steady, seeing four and two cases respectively with Quesnel seeing only three more cases than the week prior.

Burns Lake and Smithers also saw decreases in identified cases with each region only having one person test positive in the past week.

There are three ongoing community outbreaks in Northern Health, one is at Brucejack Mine that was declared on February 10th.

Additionally, Dawson Creek & District Hospital had an outbreak declared on February 7th and the Acropolis Manor outbreak in Prince Rupert has been active since January 19th.