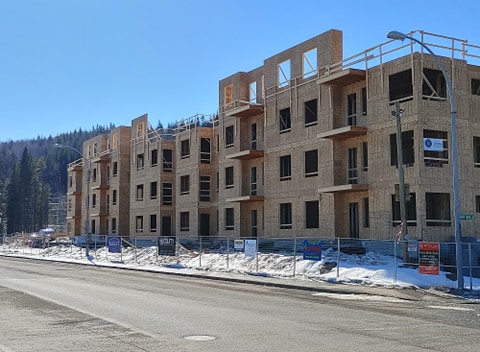 (A new 51-unit apartment complex on 4413 Glen Shee Road near 15th and Foothills is expected to open this fall. Photo supplied by Brendan Pawliw, MyPGNow.com.)

Construction on a new apartment complex in Prince George is going smoothly.

The 51-unit property located on 4413 Glen Shee Road, near 15th and Foothills is expected to be complete by October or November according to the Kelson Group.

“We are expecting a wide mixture of residents that will be attracted to it. It’s located right at the base of the university and provides such amenities like underground parking and in-suite laundry as well as a number of items that are just not available in the older buildings that were constructed in the 1960s and ’70s.”

“We’ve had a good winter in Prince George. We are now framing the fourth floor, which is the top of the building, and if all goes we are hoping to be open in the fall in either October or November.”

“We are still working on the final name of the development as its on the same property as our Forest Glen apartments. We are going to name the property uniquely and we are just waiting for our marketing people to decide what the name is going to be.”

The facility was the second most valuable building permit of 2020 at just over 14-million dollars according to the City.