Cougars come up short in see-saw affair against Kamloops 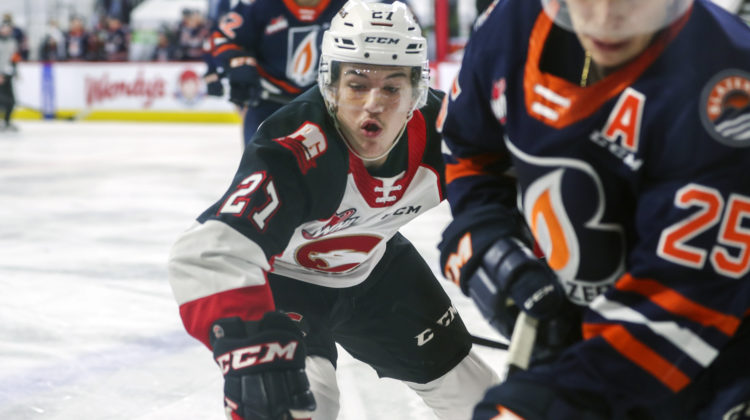 If opening night jitters exist, the Prince George Cougars didn’t have any.

In their first game inside the BC Division Hub, PG came out on the wrong side of a 5-4 decision against the Kamloops Blazers on Saturday at Sandman Centre.

After Logan Stankoven put the Blazers up 1-0 less than five minutes into the opening period, the youthful Cougars pushed right back, scoring three unanswered goals.

Ethan Browne ripped a shot underneath the crossbar on the power-play to even the game at 1-1.

That was followed up by a pair of firsts as rookies Carter MacAdams and Kyren Gronick lit the lamp to begin their WHL careers, giving the Cats a 3-1 advantage after 20 minutes.

It’s a first career WHL goal PARTY for the @PGCougars w/ @Cartermacadams collecting his first goal on a buzzer-beater in the #REMAXHub! pic.twitter.com/NarVbCS9dv

The Blazers pushed back hard in the middle period courtesy of Josh Pillar and Caeden Bankier tying the contest at 3-3.

However, before the end of the second, Koehn Ziemmer accepted a lead-feed pass from Craig Armstrong, handcuffing Blazer netminder Dylan Garand for a 4-3 edge after 40 minutes.

The Cougars had the game in their hands until a sloppy power-play led to a shorthanded marker from Connor Zary at 5:25 of the third period and evened the score at four.

Just past the halfway point of the stanza, Kamloops completed the comeback as Stankoven, with his second of the game, buried a Peyton McKenzie feed past Cougars goalie Taylor Gauthier.

PG had a chance to draw even later in the period thanks to a slashing minor from Orrin Centazzo but was unable to capitalize.

In his first game as captain, 20-year-old Jack Sander led by example posting a pair of assists in a losing effort for PG (0-1).

Meanwhile, the Cougars struck twice on the power-play out of four opportunities.

The next action for PG is on Monday as they head down to Kelowna to play the Victoria Royals (0-1).

An exciting start with a lot of firsts. Back in action Monday night.#NorthernUprising #WHL pic.twitter.com/K15bDfhW7j