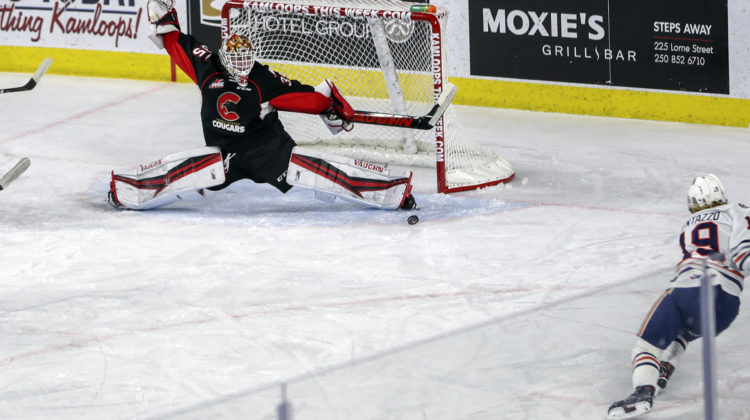 The WHL announced Friday night that the Prince George Cougars would play their next game Sunday at 6 p.m. against the Vancouver Giants.

Game story from Thursday night below:

Whatever the message was from Kamloops Blazers head coach Shaun Clouston during the first intermission it resonated with the players.

A four-goal second period ignited a dominant effort from the Blazers, pacing themselves to a 6-1 victory over the Prince George Cougars Thursday at Sandman Centre.

After Mats Lindgren (Kamloops) and Jack Sander (Prince George) traded goals in the opening 20, the Blazers began their big push just 45 seconds into the second courtesy of Matthew Seminoff who rifled the puck into the yawning cage past a sprawled out Taylor Gauthier.

The snowball continued to roll downhill for PG as Caedan Bankier notched his second of the season on the power-play, giving Kamlops a 3-1 advantage.

More quick-strike offense followed towards the end of the period as the Blazers pounced two more times in a span of 15 seconds as Tye Spencer and Connor Zary joined the goal parade stretching the lead to 5-1.

“I think they really woke up (the Blazers) and we went the other way. We started playing like individuals, we started turning the puck over and we didn’t compete. It’s just a real lesson on how hard it is to stay with it and stay in the game.”

“The second and third periods weren’t even close. Mistakes are one thing but if you don’t compete hard in all areas that is going to happen to you. I think that is the biggest thing – we looked at the clock and thought we were doing alright and it started with our powerplay. We started freelancing and it trickled down from there.”

“After the second period, they got the juice and we didn’t get anything,” added Lamb.

PG came unglued even more so in the third, taking six penalties including an ugly knee-on-knee hit by Craig Armstrong on Blazers rookie forward Fraser Minten, which resulted in a five-minute major and a game misconduct.

“I really don’t like seeing those kneeing plays either against a team or if they happen to us. You know, Army (Armstrong) always competes and I thought he worked pretty hard tonight. I thought we worked hard on the penalty kill but we did too many things that weren’t right in the last two periods,” added Lamb.

15-year-old prodigy Riley Heidt also got flagged for a slew-foot, which was viewed as a double-minor by officials Bobby Jo Love and Bryan Bourdon.

Gauthier made 36 saves in defeat while Dylan Garand stopped 25 out of 26 shots for Kamloops.

You guessed it – @blazerhockey takin’ care of business once again. #REMAXHub