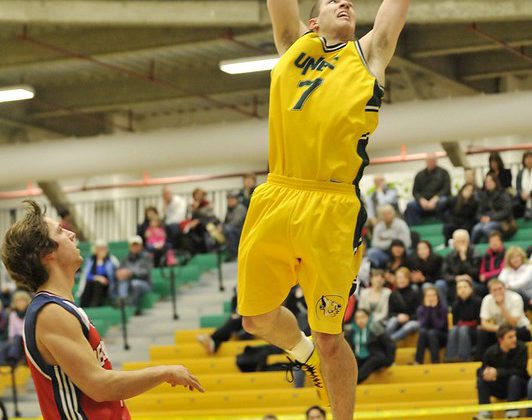 It would be inappropriate to discuss Timberwolves men’s basketball at UNBC without mentioning the name Dennis Stark.

The man known as “Mr. Timberwolf” is the final member of UNBC’s Wall of Honour inaugural class.

“The induction has been very humbling as I have been able to see all of the names and teams inducted so far. I join a very elite group of company. So, it’s humbling to have been considered among that group,” said Stark during an interview with MyPGNow.com.

Success on the hardcourt began at Kelly Road Secondary where he helped lead the Road Runners to their finest finish at the BC Provincial Championships in 2007 – making Stark an easy find for T-Wolves Head Coach Zane Robison. 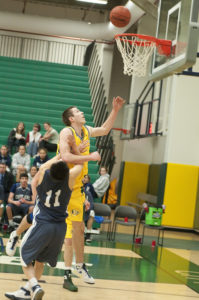 Even in his first year at UNBC, Stark’s leadership qualities were easily on display averaging just over 8 points per game to go along six boards.

Stark stated dawning the colors of his hometown team was nothing short of a dream come true.

“Even at that time as I was handed my jersey and shown where my locker was it surreal and not quite believable to me. I had moved to Prince George in middle school and immediately connected with the overall basketball scene at Heather Park as well as with the local Timberwolves. I was a faithful fan at the games in the college and it started to become more of a possibility after I attended the UNBC camps and started to develop.”

The rise of the Timberwolves men’s basketball program took another step during the 2008-2009 campaign after adding a slew of budding stars to the roster.

While Stark put up similar numbers in his sophomore year, UNBC climbed up the BC Collegiate Athletic Association standings going 12-6 – earning a bronze medal in the process.

For his efforts, Stark was named the Timberwolves loan provincial all-star and was also named
UNBC’s Best Defensive Player.

He believes the first two seasons helped shape him as well as the supporting cast into the powerhouse the Timberwolves became.

“I was certainly afforded more minutes than the typical rookie so for my own development, coach Robison gave me lots of opportunities and then the year after we had a joint recruiting class where Zane recruited some of those players as did coach Raimbault (Mike) when he joined as the new head guy.”

“With the opening of the Northern Sports Centre, and being the hosts for the nationals that season, which was everything coming together to give us that experience with the automatic berth we got and performing well in front of our home fans set us up well for the next year,” added Stark. 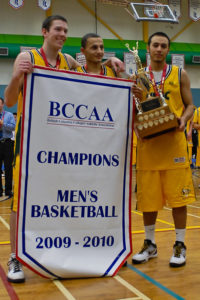 Heading into 2009-10, the Timberwolves were viewed as the frontrunners to win the CCAA National Championship. While the pressure and expectations were high under coach Mike Raimbault, UNBC blazed through the regular season with an astounding 17-1 record.

“To receive a national ranking and to be number one early on did invoke pressure but we also had belief in ourselves, the coaching staff and you can’t disregard the home crowd support and with that group of fans, any team is going to feel on top of the world. That was a huge advantage for us,” said Stark.

Stark was a key cog for the Timberwolves who ran the table at provincials and nationals earning the school’s only Canadian banner defeating the SAIT Trojans.

The Kelly Road grad became one of the most popular Timberwolves while averaging 9.2 points and 4.3 rebounds per game.

In 2010-11, the Timberwolves were once again loaded for bear, going 16-2 with Stark improving his game all over the court advancing all the way to the BCCAA provincial final.

Stark, like the rest of the team, was hungry to get back to the big dance, but the road to get there was substantially tougher with the Timberwolves now viewed as the hunted.

“Having just accomplished the ultimate goal heading into another season with a number of the key elements returning, that was certainly our goal once again. The pedigree people talk about we thought we had however, coach Raimbault had mentioned that repeating is going to be the hardest thing.”

“It’s much harder than that first win because you are battling complacency, you are battling higher expectations and the teams you beat work harder and we knew it wasn’t going to be easy. Even with the addition of new head coach Todd Jordan, we still couldn’t quite get it done.”

At the conclusion of his career, his 779 points were good for third in program history, and were the most by a Prince George product in UNBC history.

His 461 career rebounds were the most in UNBC history, and he also managed to finish top ten in career assists.

He lives in Prince George with his wife, Rhea.