By hook or by crook; Victoria snatches OT victory against Cougars 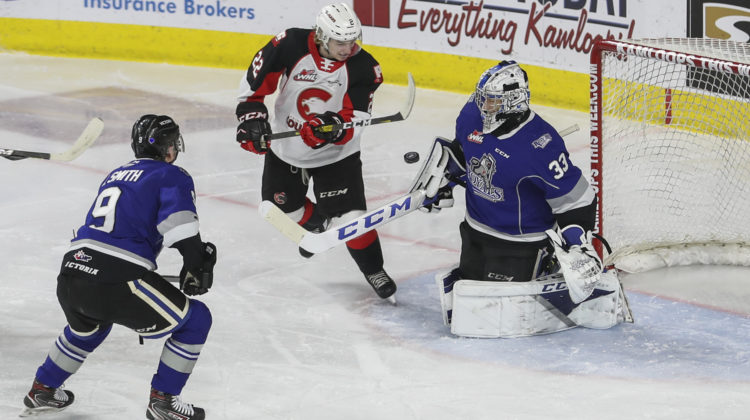 Braden Tracey spoiled what was arguably the Prince George Cougars most consistent effort of the season.

His second goal of the game at 4:36 of overtime gave the Victoria Royals a 3-2 victory against the Cats on Tuesday from the Sandman Centre in Kamloops.

“I thought that was the best effort out of all the games that we played. There is nothing to be disappointed about with this effort at all, we worked hard and it was just too bad we couldn’t finish it off.”

🎥WHL Highlight of the Night🎥
April 6, 2021 @AnaheimDucks prospect @brayden_tracey seals the win in Overtime for the @victoriaroyals 🚨 pic.twitter.com/Kn5uQ0A5NE

Despite outshooting the Royals 15-8 in the first period, the Cougars found themselves playing catch up hockey once again falling behind 2-0 at one point.

Tracey notched his first of the contest at 5:01 of the middle period rifling home a hard wrist shot past Cougars netminder Tyler Brennan who earned his second consecutive start.

Undeterred, the Cats regained control of the game thanks to the trio of Ethan Browne, Koehn Ziemmer and Jonny Hooker leading the charge.

Lamb stated post-game the team showed some much-needed resolve and maturity to fight back when the scoreboard wasn’t in the Cougars favour.

“It means a lot when you can do that (comeback from a deficit). It means you do have character, some will and a lot of heart and when we can get the whole group in that direction we will be a hard team to beat. That is what you have to build on. What I really like is that everyone is so mad for giving that point away. That’s a good telling sign of your hockey team,”

Hooker notched his first of two capitalizing on a three-way scoring play and beating Victoria goalie Connor Martin cutting the deficit to 2-1 at the end of 40 minutes.

That line continued its momentum once the puck was dropped to begin the third as Hooker took a Browne feed and handcuffed Martin for the second time in as many chances.

“He’s a real leader. He is a real positive person and he is a good hockey player with a good shot. It doesn’t surprise me, even though it is his first couple goals, he has had some really good chances and I really liked that line tonight even though it was just their second game together,” added Lamb.

Just like that @PGCougars are all tied up with the @victoriaroyals in the #REMAXHub pic.twitter.com/5yCbL1ntMt

Hooker was quick to credit his line’s willingness to work in the trenches.

“It just started with working hard in the offensive zone by winning battles and we created a lot of turnovers and as long as we kept the puck and got to the net good things happened.”

Once the dust settled, PG outshot the Royals 45-30 but went 0-for-3 on the power-play while Victoria went 1-for-2.

Next up for PG is a Saturday affair against the Vancouver Giants (4-1-0-0).

Puck drop is at 7pm from Sandman Centre and you can catch all the action with Fraser Rodgers on 94.3 The Goat.