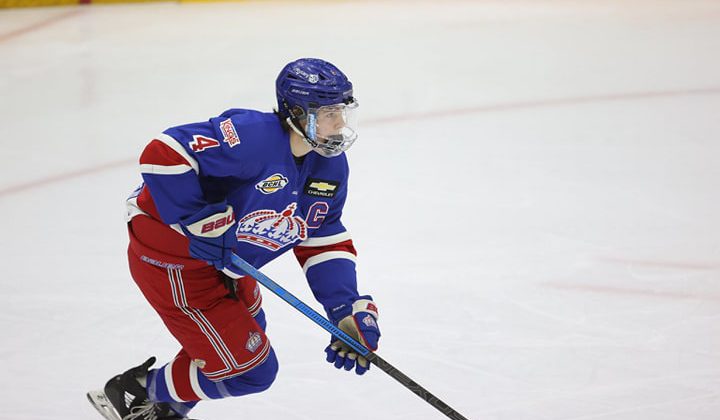 The goal light at the Chilliwack Coliseum received a workout thanks to the Prince George Spruce Kings.

Andrew Seaman and Christian Buono led the way offensively with a hat trick each pacing the Spruce Kings to a dominant 11-2 win against the Merritt Centennials on Wednesday.

“I think we knew we had a lot more offense to bring after those first two games. A lot of it was shaking off the rust as it’s been a while since we played. The second and third periods we got pucks to the net, got some good bounces and it’s just the way it goes sometimes,” added Seaman.

Buono kicked off the goal party at 4:11 of the first period scoring on a shorthanded breakaway against Centennials netminder Colton Phillips-Watts.

Seaman lit the lamp 48 seconds later to give the visitors an early 2-0 edge.

Merritt cut the deficit in half at the 16:54 mark courtesy of Jake McLean who deflected a Jerzy Orchard shot past Spruce Kings goaltender Aaron Trotter.

The floodgates opened in the middle frame for PG scoring four times.

While on a power-play, Buono buried another past Phillips-Watts to make it a 3-1 edge.

Seaman ended the period with his second of the contest handcuffing Josh Dias who manned the pipes in relief for Merritt.

The Illinois product completed the hat-trick 23 seconds into the third period courtesy of a Buono pass.

Buono, who was acquired from Merritt over the summer, registered four points in the victory for the Spruce Kings who now improve to 2-1 inside the Chilliwack pod.

Makow, who is a Vanderhoof product, picked up his first BCHL point earlier in the evening assisting on Herrington’s goal.

“It’s really special. Cariboo was good to both of us and it was awesome. Me and Johnny played together before as I came up to play with his team a couple times and he was one of the most welcoming guys on the team when I first came.”

Makow, like the rest of his teammates is relishing the opportunity to be out on ice under less than ideal circumstances.

“It’s a pretty special opportunity for all the guys in our league. Others guys in different leagues aren’t getting that chance and we are one of the lucky ones that get to play, it’s awesome and I think guys are making the most of it.”

Herrington, who is from Hudson’s Hope, is also a former Cariboo Cougars captain.

Merrimack commit and PG native Corey Cunningham got on the scoresheet for the first time this Pod season with a pair of assists.

Blake Astorino and Brandon Dent of PG didn’t record a point for the winless Centennials who drop to 0-3.

Alex Ochitwa, who also hails from the northern capital, didn’t not dress for Merritt.

The Spruce Kings are back in action Friday against the Chilliwack Chiefs (2-0).

Puck drop is at 5pm from the Coliseum.